EDITOR'S NOTE: My COVID-19 Story; Appreciate the Good, But Don’t Be Complacent 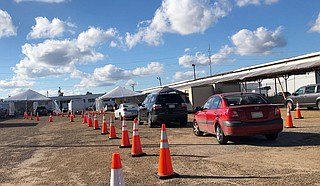 The Mississippi Department of Health has a number of free COVID-19 testing options, including this drive-thru one at the West Street Farmers Market. Photo by Kristin Brenemen 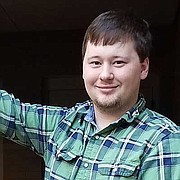 Well, it happened. Despite my continued caution, I ended up contracting COVID-19 the week before Christmas.

Throughout this pandemic, I have taken the threat fairly seriously, in my view. For the most part, I have remained isolated—as the Jackson Free Press' staff began working from home in early March when reports of the virus encroaching closer to Mississippi began to waft through the news.

I could probably draw the four walls of my home office—formerly known as the dining room—that have ingrained themselves into my memory. Not well, mind you, as I'm not the artist my younger brother is, but nevertheless I have spent nearly every day inside my apartment.

When I did decide to leave and experience a change of scenery or some much-needed sunlight, I typically only ventured as far as the grocery store, where I would wear three masks, socially distance and sanitize my hands every chance I had.

If I visited anyone for the sake of my social health, I would check to see whether the group would exceed CDC guidelines for indoor or outdoor occupancy.

Unfortunately, a close friend of mine lost his father—who had been having health issues on-and-off for years—shortly after Thanksgiving, due to natural causes. While I did not attend the funeral, his wife invited a small group of friends to swing by their house that weekend to uplift his spirits. Loving our friend, my fiancee and I visited, and the eight of us played board games and shared some laughs.

As it happened, at least one of us must had been exposed to the coronavirus, as the following Tuesday night, Dec. 15, I began experiencing fever and cough, while my fiancee developed a fever and head congestion. We drank some hot tea and began monitoring our symptoms. The next day, Hannah called into work to let them know she was feeling ill and thought it best she stayed home for the day.

By the time evening rolled around, a couple friends from the party had texted me that they tested positive for COVID-19 and that others who were present for the board-game night were being tested as well. They suggested Hannah and I get tested. Considering our symptoms had been increasing, we mentally prepared ourselves for what we suspected when we first showed temperatures: We tested the next day and confirmed that we were both positive.

Naturally, though, I do not regret visiting my friend in the least. He needed me, and I was more than happy to carry him on my shoulders through this dark time he has been undergoing. That said, I do not particularly endorse putting yourself and others at more risk than is necessary. So, please, exercise caution and reflect on the potential consequences of each decision during this uncertain time.

Thus, quarantine began anew. Not much about my daily activities has changed. I still work from home. Hannah informed her boss and coworkers about her condition. Fortunately, she had only worked one day since she had been exposed, and those she interacted with had tested negative and still have not shown symptoms all this time later, thankfully.

My coworkers graciously sent us a care package of vitamins, medicines, soups and other beneficial goodies to help get us through the rough time. I had acquired pressure headaches and fatigue, while Hannah developed severe nausea.

We began our daily regimen of recommended treatments, and I cooked my first Christmas meal—even though by then both of our senses of taste had become so deadened we wondered whether the food was worth the effort. Nevertheless, despite not being able to see any family, even in small numbers, we managed to have as merry a Christmas as we could.

Speaking of family, my usual household family coincidentally contracted COVID-19 the same time Hannah and I did, even though we had not seen them in weeks. My mother, father and brother were all blessed with very mild symptoms, and all three have already overcome them by now, albeit with some scratchy throats that are still healing, and are assumed negative.

Today marks three weeks since Hannah and I first developed symptoms. We are recovering but not in the clear. I predominantly only have to worry about fever and cough for now, both of which are fairly mild, but Hannah's nausea continues to vex her. We plan to see a doctor again this week to see whether she is still being affected by the coronavirus itself or whether COVID-19 lowered her immune system enough that she caught some sort of stomach bug or infection of some sort and needs additional medication. Pray for us.

My sense of taste has started to return, and not a moment too soon. I had no idea just how badly I would miss tasting food. I had always thought that if I had to lose one of my senses that taste would be my first choice, as I believed I could go on through life without the loss of taste affecting me. I was wrong. Since my taste returned, every food seems more delicious than it had before—or maybe I just appreciate it more.

Appreciating the good in life has been a lesson I have taken from this experience. Yes, I physically felt miserable at times, but I had a strong support system of coworkers, friends and family who checked in with us and endeavored to keep our chins up.

No, our holiday experience did not end up how we initially planned for it to go, but we made the most of it and still created some memories we may come to cherish much more in the future.

That being said, I implore anyone who is reading this editor's note today to heed this warning: Take COVID-19 seriously. Yes, I am blessed that my family survived the coronavirus and that Hannah and my symptoms are largely lessening, but that is not everyone's experience. In the same time span that I have been afflicted with this  virus, at least three people I personally knew have died because of illnesses and symptoms sustained from COVID-19, and this state lost several public leaders.

I know that news of coronavirus vaccines being disseminated has given a lot of us hope, but we have to make sure we don't get complacent just because we have a tentative end in sight. We must stay steadfast in our preventative measures.

Numbers are reaching all-time highs in Mississippi, and they will continue to grow if we forget to care about each other. This virus is a genuine threat, and this state, this country and this world has lost too many good people to it already.

Each of us must do our part to mitigate the casualties even further—so that others can appreciate the good in life even more as well. Stay safe out there.