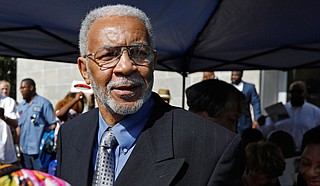 Meredith C. Anding Jr., a member of the “Tougaloo Nine," who famously participated in a library “read-in” in segregated Mississippi 60 years ago, has died. He was 79. Photo by Rogelio V. Solis via AP

JACKSON, Miss. (AP) — Meredith C. Anding Jr., a member of the “Tougaloo Nine," who famously participated in a library “read-in” in segregated Mississippi 60 years ago, has died. He was 79.

Anding was diagnosed with leukemia and had been sick since March, his son Armaan Anding said. He died Friday in Brandon, Mississippi.

The Tougaloo Nine were students at the historically Black institution Tougaloo College who staged a peaceful sit-in at Jackson's white-only library on March, 27, 1961. It is widely considered the first student protest of segregation at a public institution in Mississippi.

Anding is the second member of the Tougaloo Nine to die, after Ameenah Evelyn Pierce Omar in 2010.

Students noticed there were major disparities between what resources were available at Jackson’s library for Black residents, George Washington Carver, and the library for white residents, Jackson Public Library. Materials were generally secondhand at the Black library and many books that students needed for class assignments were missing.

On March 27, 1961, nine students first visited the Black library requested books they knew were not available. They then visited Jackson Public Library and searched for the books.

When they sat down and began to read, the library staff called the police. The students refused to leave. They were arrested and charged with breach of the peace.

The undergraduates spent the night in jail. The next day, Jackson college students picketed the Tougaloo Nine's arrest and were met by police with clubs and dogs.

When the students were released, they were greeted by applauding Black community members outside the courthouse. Again, policemen with nightsticks descended on the crowd. Two men — including a Black pastor — were bitten by police dogs.

In 1962, spurred by the protests, the American Library Association membership adopted a new policy that opened up membership to everyone regardless of race. In response, Mississippi and several other southern states withdrew from the association.

Armaan Anding said his father inherited his passion for social justice from his father, who was a member of the NAACP and his aunt, civil rights pioneer A. M. E. Logan.

Logan, known as the mother of Jackson's Civil Rights movement, was a businesswoman who opened her home to Freedom Riders.

Armaan said his father joined the NAACP youth chapter and developed a relationship with Medgar Evers, who recommended him to participate in the Tougaloo protest. Evers, a prominent Mississippi activist, was later assassinated in 1963.

Anding, who was raised in Myles, Mississippi, attended Tougaloo from 1961 to 1962. After participating in the Tougaloo Nine protest, Anding lost a private loan and had to drop out, his son said. He joined the Air Force, serving for four years. He returned to Tougaloo in 1969 to finish his degree.

Anding then moved to Buffalo, New York, to attend the University of Buffalo and earned his master’s degree in mathematics. There, he met his wife of 50 years, Maurice Anding. He taught at the State University of New York and Niagara University until his retirement in 2007.

Anding's son described him as cheerful, easygoing and calm. Anding had a deep love for the outdoors, especially camping and fishing.

In recent years, Anding and his wife moved back to Mississippi to be closer to family.

Anding remained involved in the Tougaloo community, attending events celebrating the 50th anniversary of the protest. He was present at a dedication of a Freedom Trail Marker at the site of the protest in 2017.

After the Tougaloo Nine protest, the college became known as “cradle of the Civil Rights Movement” in Mississippi and a “safe haven” for activism, said Chamberlain, who studies children’s effect on the movement.

Tougaloo holds an annual “read-in” demonstration around March 27 to remember the Tougaloo Nine. The school is in the process of planning a 60th-anniversary celebration this year to honor the activists.