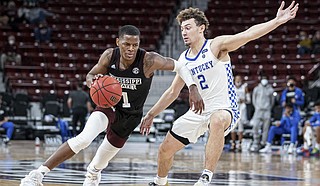 One could argue that few players have enjoyed a jump from one season to the next like Mississippi State University guard Iverson Molinar. The sophomore basketball player is enjoying a great start to the 2020-2021 season.

As a freshman Molinar averaged 5.9 points, 1.3 assists and one rebound per game. He was one of six players to see action in all 31 games last season before COVID-19 shut down the Bulldogs’ season.

Molinar is averaging 19.2 points, 4.4 rebounds, 3.3 assists and 1.4 steals per game. He leads the Bulldogs in scoring and is third in the Southeastern Conference in scoring.

The Panama City, Panama, native enjoyed two of his best games this season the past week. His play earned him SEC Player of the Week honors, his first time receiving the honor. This honor means that a player for head coach Ben Howland has claimed Player of the Week Honors in each of his six seasons at MSU.

Molinar continued his hot streak against Vanderbilt University. He tied a career-high 24 points as he set new career highs with eight rebounds and four steals with one assist. His play helped MSU earn a 84-81 victory over the Commodores.

Over the course of two games he averaged 22 points, five rebounds and two steals per game. He scored 30 of his 44 points in the two games in the second half and helped the Bulldogs rally to a win over Missouri.

Molinar’s play has helped MSU get to a 3-1 start in SEC play—the best start for the Bulldogs in conference play since the 2016-2017 season. Overall the Bulldogs are 8-4 on the season and Molinar has only played in nine games this season.

Against Texas A&M University, Moliar scored 16 points, four assists, two rebounds and one steal on Wednesday, Jan. 13. It wasn’t enough as the Bulldogs two-game winning streak in SEC play came to an end as the Aggies picked up the 56-55 win.