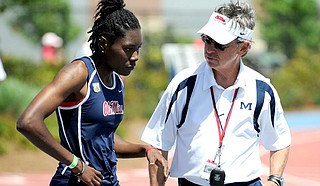 Brittney Reese is returning to the Olympic Games for the fourth time in her historic career. Reese won her 13th career national title to punch her ticket to the Tokyo Games.

The Gulfport, Miss., native dominated in the USA qualifying in Eugene, Ore., as she led most of the way as she took the top spot in qualifying and never let it go.

Reese took home her 13th national title with a jump of 7.13 meters, her best of the day and one of three straight jumps of seven meters. Her best jump ranks as the No. 3 in the world currently and Reese’s best jump since 2017.

Tara Davis of the University of Texas at Austin finished second in the event with a jump of 7.04 meters. Davis is the current NCAA Champion but couldn’t take the torch from Reese.

Reese has nine national titles in outdoor events and four more coming in indoor events. The former University of Mississippi star caught attention in 2007 for her talent.

At 34 years old, this event will also be the last Olympic Games for Reese as she plans to retire afterward. She will have a chance to add to her medal count and chase any and all records that still elude her.

Reese made her first Olympics at the Beijing games in 2008 where she finished out of the medals. Her fifth place finish is respectable but only the top three spots earn a medal.

At the London Olympics in 2012, Reese left as the best in the world. She took home the gold as she sat atop the podium in first place and a hometown hero.

Reese slipped a spot in the 2016 Olympics Games in Rio. She fell to second place as she brought back a silver medal. She has had to wait five years to get another Olympic moment.

Due to COVID-19 the Tokyo games were cancelled in 2020 and moved to 2021. The games will take place with rules in place to prevent the spread of COVID-19. The Tokyo Olympics will still be called the 2020 Olympic Games.

The Tokyo Olympics begin on Friday, July 23, and will conclude on Sunday, Aug. 8. NBC and its media outlets will have coverage of the game from beginning to end.