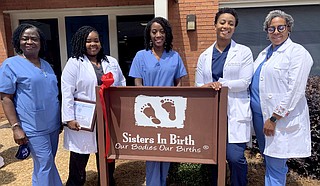 Sisters in Birth's staff works to defy grave maternal mortality rates by coming alongside women at the beginning of their pregnancy and using in-home care to help them address risk factors, such as obesity and tobacco use. Photo courtesy Sisters in Birth

The Mississippi State Legislature watched eight bills with the power to expand access to affordable health-care die in committee during the 2021 legislative session and axed another on the Senate floor, leaving the hundreds of thousands of uninsured Mississippians with no recourse.

Founder and CEO of Sisters in Birth Getty Israel says this governmental disdain disproportionately affects new and expecting mothers—particularly Black women, who die in childbirth at a rate more than two times higher than their white counterparts. “We’re supposedly a pro-life state,” Israel says. “I’m tired of the superficial responses we get from public leaders who aren’t willing to do anything about (the problem).”

While Israel believes that the legislative refusal to insure new mothers is wreaking havoc on Mississippi maternal and infant mortality rates, she says that deeper problems lie in the healthcare system itself. “Too many healthcare providers treat women like cattle,” Israel remarks. “They’re treating them like numbers, like they aren’t people who have real issues.”

The Jackson State University graduate founded Sisters in Birth in 2017 to combat these disparities and to provide a listening ear to mothers, who Israel says often know when something is wrong but see their concerns go unresolved when they bring their concerns to traditional medical providers. “It’s unsafe for Black babies to be born and Black women to be pregnant,” Israel states. “Black women aren’t the only ones complaining, but they’re the ones who are dying.”

Israel’s staff works to defy these grave maternal mortality rates by coming alongside women at the beginning of their pregnancy and using in-home care to help them address risk factors, such as obesity and tobacco use. “We provide home health, comprehensive education, childbirth prep and health screenings,” Getty says of her business’s services. “If the doctor has prescribed a plan of change, then our provider is the coach.”

This commitment to coaching is intended to empower mothers to regain control of their bodies and to make informed decisions that prioritize their own health and the health of their baby, which Israel says is the key to ultimately securing positive birth outcomes. “A mother needs to be well-informed,” she notes. “She needs to know what poses a risk for her pregnancy and her birth. That information is empowering.”

She has personally seen the effects that having access to accurate information can have on an expectant mother, as she recently counseled a woman who planned to have a c-section, a surgery which Israel says constituted $228 million dollars of Mississippi medical costs in 2015 alone. “You’re asking for a major surgery,” Israel reminded her patient. “Do you understand the risks associated?” The young woman admitted that she didn’t.

“It’s your body, your birth,” Israel said, a piece of advice she gives to all of the mothers on her staff’s docket throughout the Jackson-metro area. “You get to be in control of your body with information. You’ve got to know the risks associated with the decisions you make. How do you want to live?”

This question of better living follows patients long after they give birth, as she and her staff follow patients into the postpartum period, providing breastfeeding counseling and other necessary post-birth care, which Israel says is particularly vital for single mothers. “Who is checking on (single mothers)?” Israel asks. “Not doctors. We do. What we are doing is filling the void left by a system that’s been broken.”

Though she does believe the lack of medical and legislative concern for new and expectant mothers is dire, Sisters in Birth gives Israel hope for improved birth outcomes in Mississippi. “Even before we moved into a clinic, we had a 92% full-term birth rate,” she says. “(My staff) all works together to support the women. The woman is in the driver’s seat, and we’re right beside her.”

At this time, Sisters in Birth is accepting new patients, and the company has no limits on the number of Medicaid patients that it will accept. For more information on Sisters in Birth, Inc., visit sibirth.com.