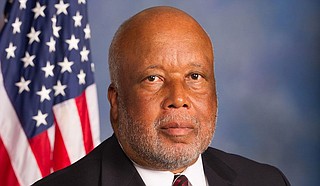 Democratic Rep. Bennie Thompson is the only Black member of Mississippi's four-person House delegation, and he was the only of the four to vote in favor of mandating removal of Confederate statues. Photo courtesy U.S. House of Representatives

JACKSON, Miss. (AP) — Mississippians find unity in bragging about the state's influence on American culture. The state prides itself on being birthplace of the blues and home of towering literary figures.

Yet, even as the nation reconsiders the public display of Confederate monuments amid a reckoning over issues of racial injustice, Mississippi—a state with a 38% Black population—still represents itself inside the U.S. Capitol with still-life images of Confederates.

Each state can have two figures in the Capitol's Statuary Hall collection, and Mississippi donated bronze statues of Jefferson Davis and James Zachariah George in 1931.

Davis served in the U.S. House and Senate from Mississippi before becoming president of the Confederacy. George was a member of Mississippi's Secession Convention in 1861, and he signed the secession ordinance that included these words: “Our position is thoroughly identified with the institution of slavery — the greatest material interest of the world.”

On June 29, the Democratic-led U.S. House voted 285-120 in favor of a legislation “to remove all statues of individuals who voluntarily served the Confederate States of America from display in the United States Capitol.” The proposal awaits a vote in the Senate.

Democratic Rep. Bennie Thompson is the only Black member of Mississippi's four-person House delegation, and he was the only of the four to vote in favor of mandating removal of Confederate statues.

Statues "of those who served in the Confederacy or supported slavery or segregation should not have a place of honor in the U.S. Capitol — that's why I voted to #RemoveHate today,” Thompson wrote that day on Twitter.

Republican Reps. Trent Kelly and Steven Palazzo voted against the legislation. Republican Rep. Michael Guest missed the vote because a family member had died and he was delayed returning to Washington. However, Kelly said in a statement that he had voted against a similar bill last year.

“I would be opposed to the federal government ordering or dictating Mississippi to remove those statues,” Guest said in the statement.

Even among the states that tried to secede from the Union, Mississippi is the only with two Confederate figures in the Statuary Hall collection.

One of Alabama's statues is of a Confederate cavalry leader, “Fighting Joe” Wheeler. The other is Helen Keller, and the base of the statue includes an inscription in Braille.

One of Louisiana's statues is of Edward Douglass White, who was a U.S. Supreme Court justice from 1894 until his death in 1921, spending his final 11 years as chief justice. The other is of former Gov. Huey P. Long.

Virginia currently has one figure in Statuary Hall, and it is George Washington. In December, the state removed its statue of Confederate Gen. Robert E. Lee that had stood in the nation's Capitol for 111 years.

“The Confederacy is a symbol of Virginia’s racist and divisive history, and it is past time we tell our story with images of perseverance, diversity, and inclusion,” Virginia's Democratic governor, Ralph Northam, said in a statement.

Guest pointed out in his statement that the legislature of each state already has the power to decide which statues to send to the Capitol.

Mississippi legislators have shown no appetite for this debate, but they took a landmark vote in June 2020 to retire the last state flag that included the Confederate battle emblem. They don't need to wait for a directive from Congress to start discussing other historical figures who could become Mississippi's still-life representatives.