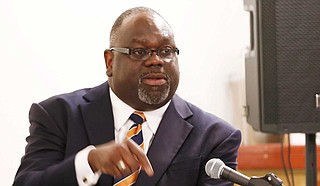 U.S. District Judge Carlton Reeves is expected to rule on a remedial plan for the Mississippi State Department of Mental Health in the near future. Photo by Imani Khayyam

JACKSON, Miss. (AP) — When Michael Hogan was appointed by a federal judge to help craft a road map for the future of Mississippi’s embattled mental health care system, he planned to tour community mental health centers in-person to see the state's services in action. He hoped to speak to patients and employees — perspectives he said would be vital in charting the Department of Mental Health’s path forward.

That was in early 2020, before the COVID-19 pandemic. Hogan, a mental health care veteran with 40 years of experience working across the country, said Monday in federal court his ability to work on the ground has been severely limited in the past year and half.

“I don't know anything about the situation on the ground, which troubles me some," he said.

Speaking at a hearing at the United States District Court in Jackson, Hogan said he feels the state has made progress at providing community-based programs for people with mental illness.

However, he repeatedly expressed concerns about a lack of data and analysis documenting the standards and overall effectiveness of the community mental health system, especially with how it’s doing at preventing hospitalizations. He said more should be done to reach out to community members for input.

“The most troubling issue is the lack of data,” he said. “There's no doubt that a lot of progress has been made since the time of the trial, but we don't know what it has been.”

U.S. District Judge Carlton Reeves is expected to rule on a remedial plan for the Mississippi State Department of Mental Health in the near future. On Monday, he heard from Hogan and lawyers representing the state of Mississippi and the United States Department of Justice, which successfully sued the state two years ago when Reeves ruled Mississippi was in violation of the Americans with Disabilities Act (ADA).

Hogan and lawyers representing the federal government have argued that an independent “monitor” should be appointed to oversee the state's progress in complying with the ADA.

Hogan said the position would be “the eyes and ears of the court” and act like a referee, an unbiased individual who will make sure rules are enforced. The state adamantly opposes a monitor, saying the department has made changes and that the position is unneeded.

He also recommended that the state conduct a survey of a sampling of 100 to 200 patients in the state's mental health care system to get feedback on services.

Litigation over the way Mississippi cares for people with mental illness has been underway for years now. The federal government issued a letter in 2011 saying Mississippi had done too little to provide mental health services outside mental hospitals. The Justice Department sued the state in 2016.

Federal attorneys said during the 2019 trial that mentally ill people were being held in jails because crisis teams didn’t respond. They said people had been forced to live far from their families because mental health services weren’t available in their hometowns. They also said people made repeat trips to Mississippi mental hospitals because there was no effective planning for them to make a transition to community services, and the most intensive kinds of services weren’t being made available.

Federal attorneys said Monday that they believe Mississippi is still in violation of the ADA and that they've seen no evidence otherwise.

James Shelson, a lawyer representing the state, said Mississippi has enacted mobile crisis teams and crisis stabilization units, or facilities that provide intensive short-term mental health care for those experiencing acute psychiatric crises. The state also offers Programs for Assertive Community Treatment (PACT), or services to help patients transition between levels of care or to avoid the need for hospitalization, as well as supportive housing and peer support services.

“We heard your honor two years ago, we didn't sit around and do nothing,” he told Judge Reeves.

Deena Fox, a trial attorney in the Civil Rights Division of the United States Department of Justice, said those services need to be expanded and that there need to be metrics in place to ensure they are working. For example, the state should require that professionals respond to a person in crisis within one hour after receiving a call in an urban area, and within two hours in a rural area.

She said it's not of help if there is a crisis team in place in an area, but they respond to calls too late or defer to law enforcement.

Fox said more than 1,000 people need access to supportive housing in Mississippi, and that the state should be working to accommodate as many of those individuals as possible. Having a place to live, a job and income is key to preventing hospitalizations, she said. However, the state's current plan calls for expanding supportive housing by fewer than 100 units, according to Fox.

“The state's proposal is to keep the status quo, which is not sufficient,” Fox said.