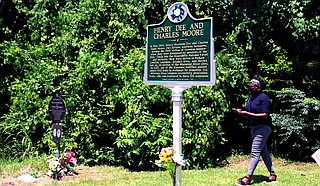 Friends and relatives gathered Thursday in a tiny town in southwestern Mississippi to dedicate a new state historical marker honoring two young Black men who were kidnapped and killed by Ku Klux Klansmen 57 years ago. Photo by Emily Wagster Pettus via Associated Press

Investigators found the remains of college student Charles Eddie Moore and lumber mill worker Henry Hezekiah Dee in a backwater of the Mississippi River in July 1964. It happened as officers were searching for three civil rights workers who had disappeared from central Mississippi the previous month.

I Want Justice, Too: Re-opening KKK Cold Cases in Mississippi 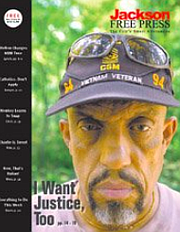 Military veteran Thomas Moore, 78, said Thursday that the new marker helps ensure his brother and their friend and high school classmate, Dee, will be remembered and that they won't just be footnotes in the history of what the FBI called the “Mississippi Burning” case — the Klan killings of Michael Schwerner, James Chaney and Andrew Goodman.

Moore, who lives in Colorado Springs, Colorado, told people Thursday under the hot summer sun in Meadville that while “Black Lives Matter” is a theme now, “they mattered back then, too.”

James Ford Seale and Charles Marcus Edwards briefly faced state murder charges in the deaths of Dee and Charles Eddie Moore in 1964, but the charges were dismissed because local law enforcement officers were in collusion with the Klan, federal prosecutors said in 2007.

Prosecutors said Seale was with a group of Klansmen in May 1964 when they abducted the two 19-year-olds from a rural stretch of highway, took them into the woods and beat and interrogated them about rumors that Black people in the area were planning an armed uprising. The victims were thrown in the trunk of a car, driven across the Mississippi River into Louisiana and then were weighted down and dumped into the water while still alive.

Many people thought Seale was dead until 2005, when Thomas Moore and a Canadian broadcaster, David Ridgen, learned that he was living in a town near where the teens were kidnapped, as did reporters for the Jackson Free Press traveling with them. Federal authorities opened a case, and Edwards became the government’s star witness after he was promised immunity from prosecution. When jurors were out of the courtroom one day during Seale's 2007 trial, Edwards apologized to the victims' families.

“That released me from the cell I had locked myself in,” Thomas Moore said Thursday, recalling the apology.

A federal jury in Jackson, Mississippi, convicted Seale of kidnapping and conspiracy. He died in federal prison in 2011.

“The state needed to officially recognize these two men, that their lives mattered, that they were important,” Sieckert said.

Dunn Lampton, the U.S. attorney who prosecuted Seale, died in 2011 after being injured in a crash. His twin brother, Dudley Ford Lampton Sr., said Thursday that the prosecutor developed a bond of trust with Thomas Moore because both served in the military. Dudley Ford Lampton Sr. said his brother told him: “'If I can convict Mr. Seale, I believe justice will be done.'”

Read the Jackson Free Press' award-winning coverage of the Dee-Moore murders, Thomas Moore's trip to Franklin and Adams counties looking for justice, and the later trial of James Ford Seale at jfp.ms/deemoore.