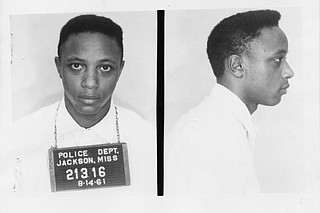 New Orleans native and activist George Raymond was integral in getting Black people registered to vote in Canton, Miss., and he was an important but lesser-known figure during Freedom Summer in Mississippi during the 1960s. Photo courtesy MDAH

Lois Blakes remembers the night her brother George Raymond left their parents’ home in New Orleans in 1961. He had rushed home the night of his high school graduation as everyone else was getting ready for bed.

“Mom and Dad, I’m leaving. I’m going,” the teenager announced, then began to gather his clothes.

“At the time, we didn’t know where he was going and what reason he was going,” Blakes says in the documentary, “George Raymond: Thirst for Freedom.”

Glen Cotton, Christopher Windfield, Corey Redd and Will Kelly answer questions after the screening of their documentary “George Raymond: Thirst For Freedom” for the Mississippi Department of Archives and History’s “History Is Lunch” series on July 7, 2021. Photo by Aliyah Veal

The family eventually learned that Raymond was headed to Mississippi, where he became a central figure in the Civil Rights Movement in the state, participating in protests including the Freedom Rides, the Woolworth’s lunch counter sit-in in Jackson and James Meredith’s March Against Fear.

“He was a strong-willed person. If he believed in something, you couldn’t tell him it was anything different. He set out to prove he was right. He was determined,” Blakes says in the film.

Filmmakers Will Kelly, Corey Redd and Christopher Windfield premiered a rough cut of the documentary at the Mississippi Department of History and Archives “History Is Lunch” series on July 7. The rough cut covers Raymond’s life from 1961 through 1964, but a longer version of the documentary is in the works, which will cover even more of his remarkable, short life.

‘They Really Suffer Until This Day’

“We want to put it into real context that these freedom riders are real people, they have real family members, and they really suffer until this day to find closure,” Arc of Freedom and Social Justice President Will Kelly says.

Arc of Freedom and Social Justice produced the film. It is a nonprofit company that conducts interviews and archives the stories of Civil Rights Movement leaders with a focus on documenting unsung heroes, like Raymond, who are not household names.

Kelly said Raymond inspired him and was relatable because he also understood the trials Black and Brown people faced in Mississippi. Both of them moved to Mississippi in 1961; Raymond was a teenager and Kelly an 11-year-old from Oakland, Calif.

“You can see by his accomplishments and endurance that he was raised by a wonderful family. He was a man of strong character, and I’m very proud to be one of his followers now, even all these years later,” the nonprofit president says of Raymond.

‘I Can Trust Him’

Activist and COFO (Council Of Federated Organizations) co-founder Dave Dennis met George Raymond in 1960. Raymond was still in high school at the time, but both men were members of the New Orleans CORE (Congress of Racial Equality), fighting for Black freedom in the South.

“If there is ever a fight and I need somebody to have my back, George is the person. When I had to do some dangerous things, George is the one I call because I can trust him,” he said towards the film’s closing.

Dennis, who was also from Louisiana, remembers Raymond, Jean Thompson, Jerome Smith and Thomas Valentine driving from New Orleans to McComb, Miss., to integrate the downtown Greyhound bus terminal. This was around the same time that students at Burglund High School walked out in response to the murder of civil rights activist Herbert Lee.

“They were very badly beaten by the Klansmen. They weren’t arrested. They were chased out of town, and when I say chased, I mean really running,” Dennis said in the film.

In 1961, Raymond’s departure from home was on an assignment from CORE, which sent him to Canton, Miss., to help increase the number of Black people registered to vote. Though Canton’s population was 60% Black, only 200 Black residents were registered to vote due to historic intimidation tactics. He came alone, staying at the Bill Will Motel and going out to talk to communities around the Jackson area.

“He was sent here by himself and later on, through his connections with Jackson State and mostly Tougaloo, he was able to get other students to come here and volunteer to try to help him establish an office here in Canton,” Canton Freedom House Civil Rights Museum owner Glen Cotton said about Raymond in the film.

On Aug. 14, 1961, Raymond and Pauline K. Sims were arrested in the Trailways bus terminal in Jackson, Miss. On May 28, 1963, Medgar Evers, Anne Moody, Pearlina Lewis, Professor John R. Salter, Walter Williams and Raymond organized a sit-in at Jackson’s Woolworth “whites only” lunch counter. They were beaten, kicked, sworn at and splattered with ketchup for two hours.

Raymond’s activism caught the eyes of Klansmen and white supremacists across the state. Mytis Raymond, his girlfriend at the time and eventual wife , remembers one particular incident involving Madison County Sheriff Billy Noble, who was notorious for harassing and beating activists. Noble stopped them, and that’s when the fear hit her, she said.

“We were ordered to get out of the car. When we got out, I was standing right next to a telegram pole. Had it not been for that pole, I would have hit the ground. He pushed George over to the side and he had his gun, just poking him in the back. You could see the marks from the gun in his back,” Raymond described in the documentary.

“Mr. Noble had told him every time that he ran into (him), that they met, that he was going to whoop him. From what I understand, he lived up to that threat,” Glen Cotton said.

Activist Don Hubbard remembers celebrity performer Lena Horne arranging for CORE to use some cars in Mississippi during Freedom Summer. Hubbard travelled to New York and drove one of the station wagons back to Mississippi. Once the car was dropped off with Raymond, he hitched a ride to New Orleans.

Hubbard was doing some work outside when his wife ran to the door and said she heard on the news that someone was missing in Mississippi while driving the car he brought down from New York to Mississippi for George.

“My first thought was to find George because George was supposed to have that car,” Hubbard said, pausing to gather himself with his eyes watering with tears over the memory of that day.

“You know he didn’t answer. I didn’t have anybody else to call down there,” he added.

CORE members James Chaney, Andrew Goodman and Michael Schwerner were driving the missing station wagon on Father’s Day, 1964. They took the car north to Neshoba County from Meridian to investigate the burning of Mount Zion Methodist Church. The organization was in talks with the church to have a Freedom school there, but the Klan found out and attacked the church, reporter Jerry Mitchell said in the film.

Chaney, Goodman and Schwerner investigated the church burning and interviewed members on what happened. As they were heading back home, Neshoba County Deputy Cecil Price pulled them over.

“Once he saw the station wagon, the first words out of Cecil Price’s mouth was George Raymond,” Mitchell added.

Price had mistaken Chaney, who was from Meridian, for George Raymond and jailed the activists for speeding. While they sat in jail, Klansmen were rallying together and getting the lynch mob organized, and they waited until the civil rights workers were released later that night, Mitchell explained. 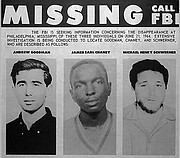 It took the FBI 44 days to find the bodies of Andrew Goodman, James Chaney and Michael Schwerner buried near Philadelphia, Miss., in 1964. George Raymond could have been driving the COFO car instead of James Chaney. Photo courtesy FBI

That night, they followed Andrew Goodman, James Chaney and Michael Schwerner, abducted them and murdered them.

Raymond aided in the search for the missing workers alongside John Lewis and Dick Gregory to no avail. The remains of the civil rights workers were found on Aug. 4, 1964, after an informant told the FBI that they were buried under an earthen dam west of Philadelphia.

George’s son, Kenyatta Raymond, said he didn’t find out until much later in life that his dad was supposed to be in that car and that Chaney was believed to be his father when the car was targeted.

“That was a Come-to-Jesus moment for me because that would have been before I was conceived, and I may not be here right now had my father been driving that car,” his son said in the documentary.

‘A Source of Pride’

George Raymond fought hard until his last days, participating in the Meredith Mississippi march near Canton in June 1966 and helping operate Club Desire in Canton, one of the state’s premier blues and R&B clubs that had opened in the 1940s. It was a meeting place for civil rights workers and organizations until the club closed in the 1970s.

Raymond died in 1973 in New Orleans from heart failure at age 30. Doctors said his body appeared to be the body of an 80-year-old due to extreme trauma, the documentary reveals.

Following the documentary, an audience member asked the filmmakers why George Raymond is not talked about more given his contributions to the movement. Arch of Freedom and Social Justice President Will Kelly believes the establishment does not want young Black men in Mississippi to see anyone like George Raymond.

“We were taught not to talk about Raymond. It was in your best interest to leave everything alone,” Kelly told the audience.

Raymond has a landmark in Canton in his honor and though he isn’t talked about much, some residents in Canton still remember him.

Bishop Samuel Blakes, Raymond’s nephew, said it is always inspiring to hear of the courage and strength his uncle possessed, and he has seen many of those attributes exemplified in his own life.

“I understand that my life really swings on the hinges of the people who have gone on before me. It’s powerful, and it is a source of pride to think that that kind of legacy is part of my makeup, my DNA and my upbringing,” Blakes said in the documentary’s conclusion.

This story originally appeared in the Mississippi Free Press.