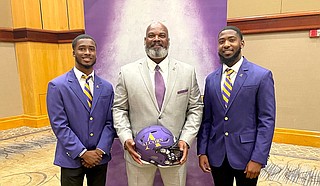 Fred McNair took over the Alcorn State University program as head coach on Feb. 2, 2016. The job became open after Jay Hopson left to take a head coaching job at the University of Southern Mississippi.

McNair had spent the past three seasons as quarterback coach under Hopson. As a former Alcorn State player, he was the logical choice to keep the program going. When Hopson left, ASU had won two straight SWAC East titles.

McNair is a two-time SWAC Coach of the Year after winning the award in 2018 and 2019. He has a 30-19 record overall and is 22-8 in SWAC play. His 30 wins has him currently sitting in seventh place in the schools all-time wins list.

The Braves made the decision not to play in the spring of 2021 like the rest of the conference. Alcorn State was the only team to opt out of playing and the SWAC forced the program to forfeit every game of the spring season.

As the 2021 season approaches, Alcorn State returns to the field but won’t be able to take back their SWAC East title. The conference added two new teams this season in Florida A&M University and Bethune-Cookman University.

The media and coaches have picked Alcorn State to win the West Division. The Braves got 128 points to take the top spot. Southern University ended up second with 108 points and Grambling State landed in third place with 85 points.

Prairie View A&M University earned the fourth spot with 78 points. The University of Arkansas-Pine Bluff is in the fifth spot with 68 points and Texas Southern University ended up in last place in the West with just 37 points.

While the Braves were picked to win the West Division, no players were selected for first or second team Preseason All-SWAC. Every school had at least one player who ended up on either the first-team or second-team but Alcorn State.

McNair will have to do one of his best coaching jobs as his team hasn’t been on the field in a live game in over a year. The Braves will have to shake off any rust quickly with their first game in Week 0.

Alcorn State opens the season against North Carolina Central University in the SWAC/MEAC Challenge. This game is so big ESPN’s College Gameday will be live that morning in Atlanta, Ga.

The game will kickoff at 6 p.m. on ESPN as the game will get most of the national spotlight. It will be a great chance for McNair to showcase his program to recruits across the nation.