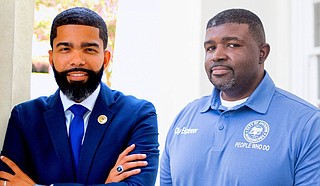 JACKSON, Miss. (AP) — Officials in Mississippi’s capital city said Thursday that they’re confident they can meet the first deadlines in an agreement with the federal government on steps to improve the quality of Jackson’s drinking water.

The initial tasks include coming up with a staffing plan for the chronically underfunded public works department by the end of July.

“The one thing that we asked for in the negotiation piece was flexibility, and that’s the one thing that the EPA stressed is that, as long as we are transparent and progressing and showing effort, the flexibility will come," Williams told The Associated Press.

The EPA examined Jackson’s water treatment plants in February 2020 at the behest of the Mississippi State Department of Health. The federal agency found conditions at the plants presented "an imminent and substantial endangerment to the persons served by the system.”

The EPA subsequently sent the city an emergency order over the water system in March 2020, along with notices of noncompliance in May 2020 and April 2021.

Starting July 1, Jackson entered into a “Safe Drinking Water Administrative Order on Consent” with the EPA that sets a definitive schedule for work on water treatment facilities and water delivery systems.

The order sets progress milestones the city will be required to meet. By August, Jackson will need to give the EPA a comprehensive list of its staff members and what positions need to be filled to help get the water system up to compliance.

The order also requires Jackson to determine the number of lead service distribution lines in its system and develop a plan for gradually replacing them. It will need to complete an inventory of all of its equipment and create an outline of the cost to make necessary updates.

Staffing has long been an issue at Jackson's two O.B. Curtis and J.H. Fewell water plants. The city was cited for not having a Class A operator on-site for every shift.

Funding public works is a challenge for Jackson because the city is not able to draw from the general operating budget. The public works department is funded by money received from water billing, payments the city has long struggled to collect.

Around 14,000 of the city’s 43,000 water customers are considered “stranded,” meaning they are not currently receiving a bill, Lumumba said this month. City water customers owe more than $100 million in unpaid bills.

The state has received loans through the EPA's Drinking Water State Revolving Fund to help start to pay for system repairs. Jackson has received almost $20 million over the past four years and is seeking an additional $27 million this year, Williams said. However, the city will need much more money to stay up-to-date with the EPA mandates.