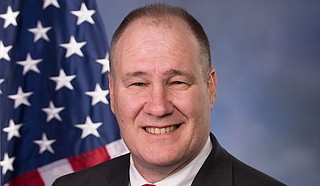 JACKSON, Miss. (AP) — A bill that would rename a North Mississippi post office in honor of a Vietnam war veteran is headed to President Joe Biden.

If approved, the U.S. Post Office at 500 West Main Street in Tupelo would now be named the “Colonel Carlyle ‘Smitty’ Harris Post Office.” Harris' F-105 fighter-bomber was shot down over North Vietnam on April 4, 1965. He was the sixth American to become a prisoner of war in North Vietnam.

Kelly praised the actions of Harris during his time in captivity.

“Colonel Harris was held as a Prisoner of War in Vietnam for just under eight years, enduring starvation, solitude, and torture,” Kelly said. “Despite dire living conditions, Col. Harris introduced the tap code to his fellow POWs to secretly communicate between cells. During his time in captivity, letters he wrote to his wife, Louise, were delivered to the Tupelo Post Office. I am thankful for the support from members of the U.S. House of Representatives and the U.S. Senate in this endeavor to honor a great American Patriot.”