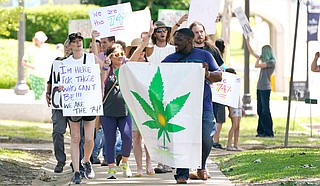 Protesters gathered outside the Mississippi Capitol and Supreme Court to demand that Gov. Tate Reeves call a legislative special session in order to bring back the medical-marijana initiative voters passed last November. Photo by Rogelio V. Solis via AP

The deadline for Mississippi Secretary of State Michael Watson to petition the state Supreme Court for a rehearing regarding a popular voter-mandated medical marijuana program has come and gone. That left a legislative special session as the only option to restore not only the initiative to law, but the ballot-initiative process itself.

Seventy-four percent of Mississippians voted "yes" on Initiative 75 last November, but the Legislature declined to pass any statute that would keep the program alive in case the Court struck the initiative down. In comparison, legislators did enact parallel legislation to change the state flag, ensuring that the process would be unhindered.

Watson declined to petition the Mississippi Supreme Court by May 28, stating that the petition would have only "delayed the inevitable."

"While I strongly considered petitioning the Supreme Court for a rehearing of its decision, my team and I reached the conclusion doing so would simply delay the inevitable," Watson said in a May 27 statement. "Based on previous case law and the 6-3 margin of the decision, we believe the request would be an unsuccessful effort."

Since the ruling, State leadership has expressed varying degrees of support for a special session. House Speaker Philip Gunn, R-Clinton, said in a May 17 statement that the governor should take action.

"We 100% believe in the right of the people to use the initiative and referendum process to express their views on public policy, Gunn said. "If the Legislature does not act on an issue that the people of Mississippi want, then the people need a mechanism to change the law. I support the governor calling us into a special session to protect this important right of the people."

Lt. Gov. Delbert Hosemann also confirmed his support for not only the ballot-initiative process, but the state's medical-marijuana program. "Citizen-driven ballot initiatives are an important part of policy-making, and I support reenacting the ballot-initiative process," Hosemann said on May 18. "I also support a medical-marijuana program, as evidenced by the Senate twice passing back-stop legislation which did not survive in the House. We are in the process of talking to Senators about the Supreme Court ruling as it relates to both issues and how to proceed."

Hosemann stopped short of a call-to-action, however, supporting a more "organized" approach in order to reduce costs.

"If the governor chooses to call the Legislature back into special session, the Senate will be ready," Hosemann said. "Because special sessions are expensive, my preference is to approach this situation in an organized fashion so when we do return we can minimize costs to taxpayers."

Watson has also called on Gov. Tate Reeves to call a special legislative session in order to restore Initiative 65 to law and, faced with a now-shaky legal foundation, ensuring past initiatives go unchallenged.

"Rather than giving a sense of false hope and spending taxpayer dollars to no avail, I strongly encourage the governor to reconvene the Legislature in an effort to quickly preserve the will of Mississippians on a few important issues," Watson said.

"Not only should the Legislature address medical marijuana, but it should also take steps to make moot any possible legal challenges to Voter ID and Eminent Domain, both of which passed with overwhelming support from voters."

Gov. Reeves himself is the sole arbiter of the decision to call a special session, and what the Legislature can do in it.

The governor has been slow to address the issue. "It's certainly a possibility," he told conservative blog Y'all Politics on May 18. "There's good reasons to do it ... and reasons to consider it a not-so-good idea."

Reeves was insistent that his calling a special session was entirely predicated on the Legislature agreeing on their decision beforehand, saying he is concerned after the cost of previous, long special sessions.

Earlier in the month, Rep. Trey Lamar, R-Senatobia, chairman of the powerful Ways and Means Committee, went on conservative SuperTalk radio to suggest that perhaps income tax could also be on the session menu. "(Income tax elimination) could be combined with a medical marijuana plan. It could help pay for some of the cuts ... all of those things could be addressed together if the governor chooses to call a special session," Lamar said.

The Mississippi Supreme Court's ruling endangers not only past initiatives, but any that were underway at the time of the decision, such as Initiative 76, which sought to expand Medicaid to hundreds of thousands of Mississippians had it succeeded.

Initiative 76 would have circumnavigated a Legislature and state leadership that have rejected the idea since it became budgetarily optional in 2012. In that year, the U.S. Supreme Court heard the case of National Federation of Independent Business v. Sebelius, and in its ruling struck down the mandate requiring states to accept Medicaid expansion in order to receive any program funding.

Since then, Mississippi has been one of 12 states that have yet to expand Medicaid, due in large part to lukewarm support or outright rejection by State leadership who have been historically reluctant to appear to support Obama-era health-care policies.

In light of the recent state Supreme Court ruling, Healthcare for Mississippi suspended its campaign, Yes on 76, to bring Medicaid expansion to a vote next year.

"Yes on 76 is reluctantly suspending our campaign to put Medicaid expansion on the ballot in the wake of Friday's State Supreme Court decision—until there is once again a functional ballot measure process in Mississippi," a statement from the campaign said after the ruling.

"We fully support the call for a special legislative session to restore the constitutional right of Mississippians to vote directly on issues of importance, including Medicaid expansion, and we will pursue every avenue possible to restore the rights of voters in this state."

'Action That Is Long Overdue'

If successful, Ballot Initiative 76 would have expanded access to Medicaid for upward of 200,000 people across Mississippi. Medicaid already covers more than 750,000 Mississippians, almost a quarter of the state's population. 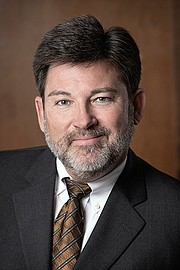 "We are disappointed to once again face obstacles to providing working Mississippians access to care," Moore said in a statement to the Jackson Free Press.

"With the strong support for expansion across the state, we encourage the Legislature to take action that is long overdue and address an issue that has been passed over for a decade," Moore said.

"This is not an entitlement program," Moore said in an interview. "It is an insurance program. For those individuals that make too much money to qualify for Medicaid, and they don't make enough money to be able to buy commercial insurance, whether that's on an exchange or not."

The fates of voter-led 2021 initiatives to tackle issues like medical marijuana and Medicaid expansion now lie in the hands of the governor, who will alone decide whether the Legislature gets a chance to revisit the initiative process this year.