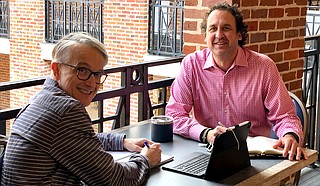 Heralding from the same department at Mississippi College, Dr. Steve Price (right) has been able to learn the ropes of his new position as National Chief Reader from Dr. David Miller (left), who previously fulfilled the role, in person. Photo courtesy David Miller

Dr. Steve Price will soon make history by joining an elite group of educators across the world. The College Board has named him as the new national chief reader for the Advanced Placement Literature exam, replacing Price's colleague Dr. David Miller. Both serve Mississippi College as English professors.

The A.P. program offers high-performing students an opportunity to begin college with placement in higher-level courses. Students who take the A.P. English Literature and Composition course in high school typically sit for the national AP examination administered each May.

As national chief reader of the A.P. Literature exam, Price will be responsible for managing and organizing the reading of the essays students who take the exam generate. Miller says that approximately 340,000 students take the exam each year. Each exam contains three essay prompts, meaning that the around 1,000 readers may potentially have to score more than 1 million essays.

The chief reader oversees the application process and training for these readers and develops the leadership hierarchy for the weeklong reading. Chief readers generally serve terms of four or five years, during which time they also serve on the exam-development committee and work to promote the A.P. exam and overall program.

"The more I've done with the A.P. exam, (the more) I see some of the nuances that make that happen," Price says. "I see how teachers benefit, so I am excited to work more with teachers."

"There was initially some resistance to hiring another chief reader from the same institution," Miller says. "That had not been done before in the history of A.P. English Lit, but Dr. Price had such an impressive interest and love for the exam that it sort of overrode all of those hesitancies and the committee that hired him (did so) without hesitation."

Price will officially adopt the position after this year's reading concludes in June. Miller will complete his service after the end of this year's reading and reporting period this July. Miller started as a reader in 1993 and worked his way up through the leadership hierarchy, becoming the National Chief Reader five years ago. Price learned of the program from his department chair at Mississippi College, beginning as a reader in 2000 before serving in leadership roles.

"My mentor, James Barcus, had a saying, 'A rising tide raises all the boats.' What he meant by that was that just by having Advanced Placement courses in a high school, the overall academic conversation in that high school (goes) up," Miller says.

The A.P. exam is one of a select few exams with national and international standards that create a commonality in scoring recognized by colleges and universities across the world. "If students in Iowa, Pennsylvania and Mississippi take the (A.P.) program, they may read different texts but there is a national standard to that," Miller says. "If they receive a score on the English Literature exam, colleges understand that that score is not local. It's not subjective. It's objective."