Shellheads: Fans Talk on the Heroes in a Half-Shell 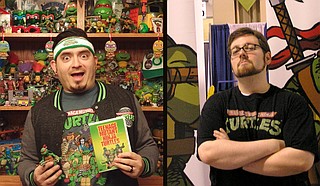 (Left) Sergio Lugo II also serves as a host for Reality Breached, a podcast that developed into a network for additional locally produced podcasts. (Right) Jeff Hubbard and his family own The Warp Zone in Brandon, an arcade with vintage gaming cabinets that also restores and cleans older consoles. Photo courtesy Shellheads

When driving through his new Brandon neighborhood, Sergio Lugo II noticed the likeness of a gaming controller on the logo of an unfamiliar business. Curious, he stepped through its door and began looking around, inspecting the vintage arcade cabinets and other video-game memorabilia, uncertain as to what services this storefront offered. From behind the counter, co-owner Jeff Hubbard knowingly said, "You want to know what this place is, don't you?"

"Exactly! What am I looking at?" Lugo replied.

Hubbard gave Lugo the walkthrough of The Warp Zone's offerings as a gaming arcade and repair shop, and the two continued to talk about their interest in "nerdy" fandoms, eventually hitting Lugo's favorite: the Teenage Mutant Ninja Turtles franchise. As it happened, Hubbard wrote for a TMNT blog called Go Green Machine (gogreenmachine.org), which Lubo excitedly said he read.

Years later, Lugo's podcast Reality Breached, which he started in 2011 with co-founders Reid Walker and Josh Alcaraz, interviewed Hubbard for the podcast's first local business spotlight. The interview went well, so when Lugo found himself yearning to start a new show about his favorite fandom, TMNT, he approached Hubbard with a proposition: "Hey, I've got a bunch of friends who really aren't as into the Ninja Turtles at the level I am at," Lubo said, pausing, "How about you?"

And thus, Shellheads came into being two-and-a-half years ago and has since produced 65 episodes and two specials, with more content continually in the works.

Lugo, a Jackson native, graduated from Murrah High School in 2001 and studied at the University of Southern Mississippi before starting a job with Comcast, which he has held for 12 years and counting, and getting into podcasting. He is presently married and has three children, the youngest of which is around a half-year old and was born during a hectic time of the pandemic.

Hubbard grew up in Brandon and graduated from Brandon High School in 1997. He and his family own The Warp Zone, which would have celebrated its 10th year in business had COVID-19 not interrupted. Hubbard, however, hopes to reinvigorate the company's celebratory plans this year as case numbers continue to decline.

Recently, both hosts spoke with the Jackson Free Press about their passion for the pizza-crazed heroes.

JFP: What was your experience with TMNT prior to starting Shellheads?

Sergio: I was the right age for Ninja Turtles as a child. I was about 8 or 9 when they took over the entire planet, and I was kind of obsessed with them for quite a while—that included the TV series, the movies, the Archie comics series—but I didn't do much of the backend work to see where they came from or who created them until I was in college (when) I started looking at my old comics and saying, "Oh man, I remember these. Let me try to fill in the holes of my collection." And that had me diving deeper into their history. ... When the 2003 TV show came out, that really jump-started my love for the characters again. I've been on a hot spree of collecting Turtle stuff since then.

JFP: Can you guys elaborate on the content of the show, the extent of what you cover?

Jeff: Shellheads is a huge melting pot of basically everything from all the different eras or iterations of the Ninja Turtles, from the original Mirage comics to Archie's "TMNT Adventures" to IDW's Turtles comics, to the video games, movies, TV series and fan-made projects. You name it, we pretty much cover it. Some of my favorite (episodes) cover the weird things that happened in the late '80s and '90s, like when the Turtles were onstage doing tours as a rock band in what was called The Coming Out of Their Shells Tour, which was (pauses) great?

Sergio: It was fantastic, Jeff.

Jeff: (Laughs) Well we have varying opinions, but there were some banging songs in that soundtrack. Others, not so much.

Sergio: To add to that explanation, we do have a specific theme for each episode, but we start off with a couple segments. First there's What's in Sergio's Box, where I talk about the new Ninja Turtles stuff I got in the mail that week—and there hasn't been a week yet that I didn't have something that I got in the mail. Following that we have the News Section, which we keep populated with everything from movie to action-figure news.

JFP: How has recording Shellheads been affected by the pandemic?

Jeff: It's been a little unusual not being able to see each other for over a year, but we're still rocking and rolling with it via Skype and whatnot. We were so used to recording in-person with the setup Sergio has. I'd either bring dinner to eat beforehand or drinks for the show because you have to stay hydrated. So having that disconnect (of recording remotely) definitely makes you sad, but I look forward to our next in-person recording, now that we're both fully vaccinated.

Sergio: It's funny. The reason I threw that question for you to answer first, Jeff, is because Shellheads was primarily the only podcast that I consistently recorded in person. Most of the other things we do on Reality Breached is through Skype, so when the pandemic hit, Reality Breached wasn't affected as much because it was mostly business as usual.

With Shellheads, though, you're absolutely right. It was a huge change, and you can hear it in the episodes because we were so used to bouncing off of each other in-person, and the conversations flowed naturally. Over the phone, there were a good two or three episodes where we were stumbling over each other's words, where we weren't sure if what we were saying was heard on the other end. It was just a lot more clumsy to transition into it. Now, we've got it down, and the episodes are wonderful.

JFP: Do either of you have anything else youid like to add?

Sergio: It has been quite an adventure digging back into these versions of Ninja Turtles that I had experienced once 10 or 15 years ago but am now able to dust off and look at with a modern, critical eye so that I can have an intelligent discussion about them. That's a fascinating practice regardless of whatever property you are engaging in. Even if you don't like Ninja Turtles, I strongly suggest people do that with their favorite fandoms, because it really helps you appreciate them more than you already do.

Shellheads is available through realitybreached.com and on all major podcasting platforms.