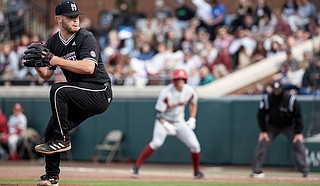 Mississippi State is the seventh overall national seed and is guaranteed to host a Super Regional if the Bulldogs advance. MSU finished the regular season 40-15 but is coming into the regional after bombing in the SEC Tournament.

The strong regular season helped MSU, and the SEC Tournament dud didn’t hurt the Bulldogs. MSU will host the four-team regional with a double-elimination format to decide the winner.

The regional will play out until each team has but one is eliminated with two losses. The winner of the regional heads to the Super Regional.

Southern Miss heads north to face the Mississippi in the Oxford Regional. The Rebels at 41-19 are the No. 12 national seed and will host second seed USM, third seed Florida State University and fourth seed Southeastern Missouri State University.

The Rebels were ousted from the SEC Tournament by eventual champions and No. 1 overall seed University of Arkansas. UM is coming into the tournament fairly hot after a nice run in the conference tournament.

Southern Miss ended up losing twice to Louisiana Tech University to fail to reach the Conference USA Tournament final. The 37-19 Golden Eagles are just as historically rich in the NCAA Baseball Tournament as the Rebels and Bulldogs.

Southern Miss faces Florida State on Friday, June 4, at 2 p.m. and UM faces Southeastern Missouri State at 7 p.m. The format will follow the same as the Starkville regional.

The last undefeated team will be waiting at 5 p.m. for the winner of the 1 p.m. game. Those two teams will play until there is one team left to reach the Super Regional.

One team not in the 2021 NCAA Tournament is Jackson State University. The Tigers went 24-0 in the Southwestern Conference in the regular season. But in the SWAC Baseball Tournament Championship Game, the Tigers were upset by Southern University 7-6.

It was the first SWAC loss for JSU and cost the Tigers a chance at the NCAA Tournament.