Gov. Supports 'Will of Voters' on Issue of Medical Marijuana 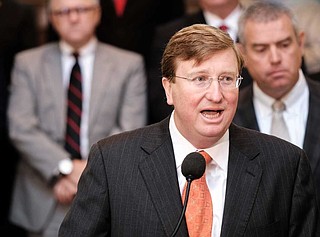 “I support the will of the voters. ... I think we will have a medical marijuana program in Mississippi," the Republican governor said during an interview that aired during the weekend on WLOX-TV.

A majority of justices ruled May 14 that a medical marijuana proposal, Initiative 65, was not properly on the November ballot because Mississippi’s initiative process is outdated and unworkable. The ruling overturned voters’ approval of Initiative 65 and took away citizens’ process to put issues on the statewide ballot.

Mississippi remains in the minority of states without a medical marijuana program. Reeves has not said whether he will call legislators into special session, but he told WLOX about passing a law: “It is imperative that we get it done, and get it done quickly."

The Senate Public Health Committee met last week to start discussing what could go into a medical marijuana law.

About 1.3 million people voted in Mississippi in November, and more than 766,000 of them voted in favor of the medical marijuana proposal. That’s about 10,000 more residents than voted in November for then-President Donald Trump, who easily won in Mississippi despite losing his race for a second term.

The crux of the Supreme Court ruling dealt with how signatures are collected for initiatives.

Mississippi requires initiative sponsors to gather one-fifth of their petition signatures from each congressional district. The process was put into the state constitution in 1992, when Mississippi had five districts. The state dropped to four districts after the 2000 census because of stagnant population, but the initiative process was not updated.

The state attorney general issued a legal opinion in 2009 saying initiative sponsors should collect signatures from the five old districts.

Madison Mayor Mary Hawkins Butler sued the state days before the 2020 general election, arguing that the medical marijuana initiative was not properly on the ballot. Her attorneys argued that the constitution creates a mathematical impossibility: With four districts, more than one-fifth of the signatures must come from each. A majority of justices agreed.

Butler opposed the medical marijuana measure because it would have limited cities’ ability to regulate where such businesses could have been located.