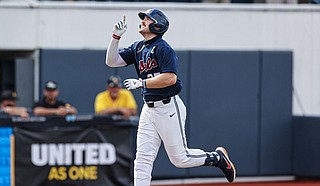 It took some heroics from senior Tim Elko for the Rebels to advance. Elko has been limited to being a designated hitter since tearing his ACL on April 5. That hasn’t stopped him from having an impact on the field.

In the regional final, Elko went 3-for-3 at the plate with two home runs, five RBI and two walks. His first home run was a grand slam to put the Rebels up 9-0 in the second inning, and his second home was a single shot in the fourth inning.

Over the course of the regional, Elko went 4-for-13 with 10 RBI, six runs, four hits, six walks and three home runs. While not the greatest numbers, he has come up clutch when the Rebels needed him the most.

The Rebels travel west as they face the University of Arizona in the Tucson Super Regional. The Wildcats are the No. 5 national seed and will host the No. 12 national seed Mississippi.

The Super Regional is a best of three format played over three days. The first team to win two games moves on to the College World Series in Omaha, Neb.