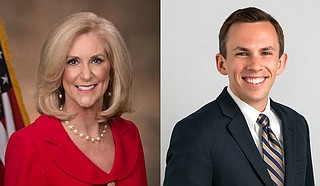 Attorney General Lynn Fitch (left) and Auditor Shad White (right) announced Monday that the state had reached the settlement with Centene Corp., which it called the largest Medicaid managed care organization in the U.S. Photo courtesy State of Missisippi

JACKSON, Miss. (AP) — A managed care company has agreed to pay Mississippi $55.5 million to settle a lawsuit that accused one of its subsidiaries of overcharging the state's Medicaid program for pharmacy benefits management.

Attorney General Lynn Fitch and Auditor Shad White announced Monday that the state had reached the settlement with Centene Corp., which it called the largest Medicaid managed care organization in the U.S.

“This settlement makes clear that the days of hiding behind a convoluted flow of money and numbers are over,” Fitch said in a news release.

The agreement represents one of the largest civil settlements following an investigation by the state auditor's office in Mississippi history.

The Mississippi auditor's office began investigating Envolve Pharmacy Solutions, Inc., a company owned by Centene, in 2019 based on suspicions that pharmacy benefits managers were charging the state more for services than allowed by a price cap, state officials said.

"Mississippi taxpayers deserve to get what they paid for when the state spends money on prescription drugs, and we will stand up for the taxpayers if they do not get a square deal,” White said in the news release.

Centene said in its own news release that it had reached no-fault agreements with Mississippi and Ohio over pharmacy benefits management work done by Envolve. It said the settlement with Ohio was for $88 million.

“The practices described in the settlement focus on the structure and processes of Envolve, primarily during 2017 and 2018. In the settlements, the Company denies any liability for these practices,” the Centene news release said.

Besides the $55.5-million settlement, the agreement with Mississippi calls for the company to “provide full transparency related to the adjudication and payment of all pharmacy benefit claims," state officials said. That includes providing information for the Division of Medicaid to discern the amount paid for each pharmaceutical claim.