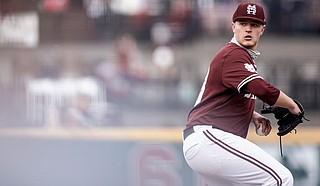 Mississippi State University didn’t have the best postseason start, as the Bulldogs were bounced quickly out of the Southeastern Conference tournament. MSU ended up being routed by the University of Florida 1-13 and the University of Tennessee 2-12.

The Bulldogs turned things around once they reached the NCAA Baseball Tournament. MSU rolled through their regional. The host Bulldogs didn’t drop a game as they earned the right to host a Super Regional.

The University of Notre Dame traveled to Starkville, Miss., to battle the Bulldogs for a spot in the College World Series. MSU spent most of the first game trailing the Fighting Irish before SEC Player of the Year Tanner Allen hit a home run to seal the 9-8 win.

MSU set a Super Regional attendance record with 14,385 people in the opening round game. The Bulldogs needed just one more win to reach the CWS, but Notre Dame wouldn’t go easy as they collected a 9-1 victory to force a winner-take-all third game.

A huge second inning offensive outburst helped the Bulldogs jump out to an early 7-1 lead. Notre Dame rallied but could never get closer than being four runs behind as the Bulldogs won 11-7 to reach the CWS.

In the process, MSU set another Super Regional attendance record with most fans on campus for a three game series in NCAA history. Over the three games, 40,140 attendees made their way into Dudy Noble Field.

This College World Series appearance is the 12th overall for the Bulldogs and the third consecutive CWC appearance for MSU. The Bulldogs reached the CWS in 2018 and 2019. The 2020 season was cancelled due to COVID-19. MSU’s CWS streak is the longest active in the nation.

In the 2018 CWS, the Bulldogs went 2-2 and tied for third place. The 2019 CWS appearance ended with 1-2 record and finishing tied for fifth place.

The best finish for MSU happened in 2013 when the Bulldogs finished runner-up to the University of California at Los Angeles. MSU wouldn’t reach the CWS again until 2018 and their current streak started.

These two teams have faced each other earlier in the season with MSU earning a 8-3 win over the Long Horns. That was back in February and Texas started the season 0-3 but has rebounded to go 47-15 overall so far this season.

MSU and Texas will meet for the second time this season on Sunday, June 20, at 6 p.m. with the game on ESPN2. If the Bulldogs lose they will play at 1 p.m. on Tuesday, June 22, on ESPNU. A MSU victory means they play at 6 p.m. on the same day and broadcast on ESPN2.