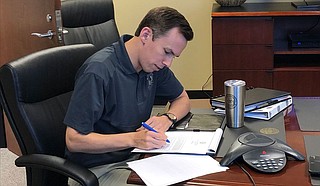 The state of Mississippi erroneously paid out more than $117 million in unemployment benefits last year and during the early months of the coronavirus pandemic, State Auditor Shad White said. Photo courtesy Shad White

JACKSON, Miss. (AP) — The state of Mississippi erroneously paid out more than $117 million in unemployment benefits last year and during the early months of the coronavirus pandemic, State Auditor Shad White said.

Mississippi's Department of Employment Security made payments to people who never actually lost a job, were already in jail and others who were ineligible to receive unemployment benefits, White's office alleges. The finding matches those at other employment agencies in several states like California, where $11 billion in unemployment overpayments have been identified, he said.

“It’s more important than ever to understand the mistakes that were made when money was flowing so freely during COVID,” White said Tuesday.

To be able to offer benefits more quickly to the thousands of people who lost work during the coronavirus pandemic, offices in charge of unemployment benefits lifted some protocols and internal controls that usually help detect fraud, White said. One requirement temporarily lifted in Mississippi was that people receiving benefits provide proof to the state they are actively searching and applying for work.

However, Department of Employment Security Executive Director Jacqueline Turner disagreed that her office subverted any protocols in order to give out benefits. In a response to the auditor’s report, obtained by the Clarion Ledger, she wrote that the agency was working under executive orders issued by Republican Gov. Tate Reeves and then-President Donald Trump. During a state of emergency, those orders override the law, Turner said.

“MDES respectfully disagrees with this finding because it does not acknowledge or allow for the existence of this pandemic, or the radically new and different federal programs implemented during the disaster,” Turner wrote.

Turner did acknowledge that a number of improper payments and overpayments occurred.

White said nearly every state he's talked to across the country has lost millions of dollars to fraud out of their unemployment funds.

"Mississippi was no exception,” White said. “The federal government and state governments around the country do not need to repeat those mistakes the next time we have a recession. I hope this audit and those like it in other states are used to fix anti-fraud controls and prevent this kind of massive loss from happening in the future.”

All unemployment overpayments made by Mississippi’s Department of Employment Security after June 30, 2020, will appear in next year’s audit report, White said.