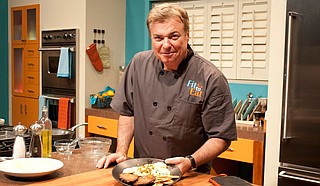 Chef Rob Stinson has hosted MPB’s “Fit to Eat” program for a decade and now shares his expertise with the rest of the United States on Create TV. Photo courtesy MPB

“Fit to Eat,” an original program created by Mississippi Public Broadcasting, is now officially part of the Create® TV channel’s lineup, airing nationwide on Mondays at 8:30 a.m. and 3:30 p.m. Central Standard Time. The show started in 2012 to help combat the state’s obesity and health problems at a time when 68.6% of Mississippians were overweight or obese.

Chef Rob Stinson, a Gulf Coast restaurateur, has hosted the program since it began and over the last 10 years, “Fit to Eat” has really hit its stride. Each half-hour episode offers a balanced menu of a starch, meat and vegetable and as Stinson says, this flavorful food will fool you.

“We’ve been conditioned to think that healthy food is tasteless, but often the opposite is true,” he says. “I always make the food visually appealing, and I teach viewers how to get great depth of flavor from fresh, local ingredients.”

Stinson also provides tips on making food healthier through simple substitutions (“use this, not that”) and by avoiding white sugar, salt and wheat flour. “It’s Dr. Rick deShazo’s anti-white diet,” he jokes. “There are lots of alternatives available, and because we use rice flour and other thickeners instead of wheat, it also means most of the recipes are gluten-free.”

The show focuses on using local ingredients available at any grocery store to prepare healthy recipes that Mississippians could prepare without much difficulty.

Registered dietitian Rebecca Turner often joins the chef and gives insights into the medical and nutritional benefits of foods. “I’m a busy mom of two, so I understand what it’s like to try and incorporate these ideas into a busy lifestyle,” Turner says. “My role on the show is to give families the quick tips and make Rob’s recipes accessible, no matter your cooking style or your level of cooking skill. Rob shines in being able to make delicious dishes, and I’m here for the everyday cook. I can help you shop a little healthier and easily add more servings of fruits and veggies to your family’s meals.”

Many episodes also contain Down on the Farm segments, where Stinson visits a dairy, a sweet potato farmer or other grassroots producers. Delbert Hosemann and Tate Reeves, among other well-known Mississippians, have also appeared as guests on the show and have chopped, sizzled and served the meals. “In addition to cooking, we discuss current events to keep the show relevant,” Stinson says.

“Having another MPB program air nationwide on Create® TV is a win for Mississippi,” John Gibson, MPB Director of Television, says. “This program gives Mississippi national exposure and showcases healthier choices of what to cook and how to cook it. It shows Mississippi in a positive light.”

These programs come from American Public Television, the National Educational Telecommunications Association, Public Broadcasting Service, and a handful of local public television stations across the country including two shows from Jackson’s own Mississippi Public Broadcasting: “Fit to Eat” and “Mississippi Roads.” Create® TV will air a curated selection of “Fit to Eat” episodes, and all past shows—and all recipes—are available on MPBOnline.org/television/fit-to-eat. Visit CreateTV.com/locate to find your local station.

Michele D. Baker lives in Belhaven in a restored 1920s bungalow with two cats and too many books. She enjoys world travel, reading and listening to public radio. Learn more at MicheleDBaker.com.