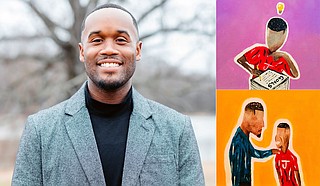 Warn Wilson Jr. has a deep desire to pass along the knowledge he did not learn when he was younger. "Brown Money," his first children's book, is his first attempt to share information with young people about careers in STEM areas—science, technology, engineering and math.

"This is everything I wish I'd known when I was young," he says. Now an electrical engineer living in Memphis, Wilson grew up in Jackson, attending Power APAC and Murrah High School before graduating with a bachelor's degree from Mississippi State University.

The 52-page work was published in 2019 after a friend suggested Wilson stop just talking about it and take the plunge. "I wrote the book in two days, illustrated it in three weeks, and in another month, I had a printed copy," Wilson says.

As incredible as this turnaround may seem, Wilson takes it in stride, insisting that once he is interested in a topic, he works at an amazing pace. Those interests vary, as Wilson finds himself interested in everything, it seems, from real estate, to the stock market, to engineering and art.

"When I was writing my children's book, I thought, 'What would I want my future children to know?' I have younger siblings and cousins, and that helped me think about it," he explains.

"My idea is that you should learn about everything you're interested in," he adds. "Try it all. Even if you fail, you can still get valuable information."

"Brown Money" seems to be doing well: Wilson has done several readings to elementary students in the Memphis area over Zoom, with more scheduled. "I've tried to introduce these concepts in an easy-to-chew format," he says. "I've got relatives in real estate, landowners and managers, but not every child gets to see that as a job. If you don't even know it exists, there's no way to find out."

But the science-and-hard-facts side remains only one facet of Wilson, as the  focused, young entrepreneur who hasn't even reached 30 yet is also an artist. He also created an illustration for every text page of the book,

"I've always loved drawing and painting," Wilson says. "For each page, I thought about what concept I was trying to get across. I sketched that out, and then created a painting for that page." The cover features a painting from a past series that fit the idea he was trying to convey.

To reinforce the concepts presented in his book, Wilson also created Brown Money: The Card Game. "It's a fun way for kids to remember the ideas in the book," Wilson claims. "There are occupation cards and penalty cards, and you earn or lose money depending on what you draw."

Wilson keeps himself busy, working a full-time job as an engineer and spending his nights and weekends writing and drawing. "I still love being an engineer and creating things," the artist says. "But I keep creating content for books, and drawing, and I want to keep turning that into motivational material."

In addition to his engineering job and budding career as a writer and artist, Wilson recently opened a consumer electronics business called Vondu Electronics (online at VonduElectronics.com/store)—keeping in line with his goal of having multiple, diverse income streams and continuing to learn more about the world around him so that he may pass that information to future leaders from his community and beyond.

"As an engineer and artist, I have always had a desire for creating new things. I love to see an idea manifest into a tangible object in the physical world," Wilson concludes. "I hope to use my academic insight and artwork to influence the next generation of Black thinkers and creators."

Find "Brown Money," its sequel "Brown Money 2"—set to release this spring—and the card game, as well as his second book, "Royal Counsel," and more at WarnWilson.com.