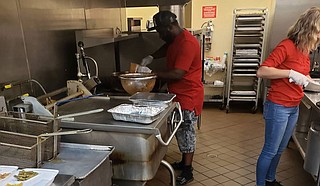 Wright's Foundation for Better Communities, better known by its acronym WFBC, is gearing up for its third-annual Donate A Dish event to serve home-cooked meals to homeless individuals at Stewpot Community Services' Opportunity Center from March 24 to 31.

Derick Wright founded the nonprofit organization three years ago to "uplift and enhance" the Jackson community. This spring, WFBC plans to serve hot to-go meals to 245 members of Jackson's homeless community the week before Easter, and asks that each pre-cooked dish be made to serve roughly 35 portions.

Volunteers may prepare and donate pre-cooked dishes that organizers will either distribute or deliver. Photo courtesy Wright's Foundation

"We often see nonprofits or groups of people feed homeless people on Thanksgiving or Christmas," the 28-year-old said, "Nobody really reflects on Easter."

Considering the significance the Easter holiday holds for Christians, in 2018 Wright and his six-member board decided to collect potluck-style dishes from community members and provide for homeless people on a day that few think to do so.

At that first event, Wright and his volunteers served 130 people at the Opportunity Center "restaurant style," seating them at a table, taking their order, and returning with a plate of hot food. Though the COVID-19 pandemic prevented them from continuing that kind of service, WFBC held Donate A Dish last year, preparing uncooked donations and serving them hot in to-go plates.

This year, Wright says, Donate A Dish will be a hybrid event. Cooked dishes will be stored, reheated, and served in to-go plates. Depending on the weather, WFBC will either set-up a tent and outdoor tables and distribute meals, or else deliver them directly to those that need it.

Though donating dishes remains the focus of the event, Wright encourages people not to forget about drinks, plasticware, napkins and to-go plates. As for homeless people who are not at the Opportunity Center, Wright says, "give us a call and we'll drop food to them, too."

Motivated by his own experiences with homelessness and bankruptcy at age 22, Wright founded WFBC as a support system for Jacksonians to turn to when they need help. He wants WFBC to be "something for people to depend on, whatever they need, so they can continue to be positive about life."

Christie Burnett, who has served as director of the Opportunity Center since 2013, recalled the day Wright walked "out of the blue" into her office three years ago. "He shared his vision and what he wanted to do with his foundation, and we've been partnering ever since," Burnett says.

The Opportunity Center aims to provide homeless individuals with as many resources for security and success as possible, from computer labs and mail services, to a vast clothing closet and showers. Burnett encourages the center's patrons to "do the things they need to do," be that finding steady housing or better jobs. "We do not want to see you back on the street," she says. 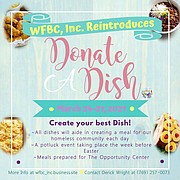 Donate A Dish gifts should be made to serve roughly 35 portions. Photo courtesy Wright's Foundation

Wright and Burnett are grateful for the partnership their two organizations have sustained for the past three years. "They always seem to come through when we need them," Burnett says of WFBC. Admiring the Opportunity Center's dedication to improving homeless peoples' lives, Wright says, "We're going to help them as much as we can."

"We all have a dish we want to present, and we all have a heart to help people in need," Wright says.

For information on donations and how you can help, contact Derick Wright at 769-257-0073. Follow WFBC's page on Facebook for updates on this and other events. For more information on the Opportunity Center, go to stewpot.org/services/opportunity-center/.