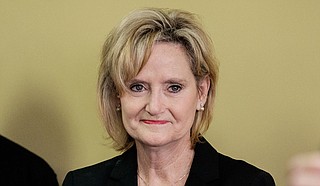 Republican Sen. Cindy Hyde-Smith of Mississippi is facing criticism for saying people should avoid political activities on Sundays to keep the Sabbath holy—an idea that Hyde-Smith, herself, has not always followed. Photo by Ashton Pittman

JACKSON, Miss. (AP) — Republican Sen. Cindy Hyde-Smith of Mississippi is facing criticism for saying people should avoid political activities on Sundays to keep the Sabbath holy—an idea that Hyde-Smith, herself, has not always followed.

The U.S. Senate Rules and Administration Committee held a hearing Wednesday on a Democratic-sponsored bill that proposes the largest overhaul of U.S. elections in a generation. Republicans oppose the bill, and Hyde-Smith responded to remarks by Majority Leader Chuck Schumer, a Democrat from New York.

“He was wondering why, on Sundays, Georgia would not participate in an electoral process of gathering signatures to registration and things on Sunday, and I would just like to respond to that," Hyde-Smith said. “Georgia's a Southern state, just like Mississippi. I cannot speak for Georgia, but I can speak for Mississippi on why we would never do that on a Sunday, or hold an election on a Sunday.”

She held up a dollar bill.

“This says, ‘The United States of America, In God We Trust,'" Hyde-Smith said. She also noted that the phrase is “etched in stone in the U.S. Senate chamber.”

“When you swore in all of these witnesses, the last thing you said to them in your instructions was, ‘So help you God,'” Hyde-Smith said. “In God's word in Exodus 20:18, it says, ‘Remember the Sabbath and keep it holy.’”

Hyde-Smith was inaugurated for her current term on the first Sunday of this year.

She has engaged in other political activities on Sundays. Her campaign issued a news release on Wednesday, Oct. 17, 2018, saying that Hyde-Smith would go on a bus tour to meet voters: “On Sunday, the tour will stop for a reception at 4:30 p.m. at St. Catherine’s Village in Madison."

On Sunday, Nov. 11, 2018, Hyde-Smith issued a statement responding to a video clip that showed her praising a supporter by saying: “If he invited me to a public hanging, I’d be on the front row.” The timing of this skirmish was not her choice: The clip was posted to social media that day by Lamar White Jr., publisher of a Louisiana-based blog, The Bayou Brief.

Hyde-Smith said in a news release that Sunday: “In a comment on Nov. 2, I referred to accepting an invitation to a speaking engagement. In referencing the one who invited me, I used an exaggerated expression of regard, and any attempt to turn this into a negative connotation is ridiculous.”

Hyde-Smith is white, and critics said her “public hanging” remark showed callous disregard of the history of the lynching of Black people in Mississippi. She was in a 2018 special election runoff against Democrat Mike Espy, who is Black. Espy is a former congressman and former U.S. agriculture secretary. He repeatedly criticized Hyde-Smith for the hanging remark, including during a 2020 rematch that she also won.

Ben Jealous, current president of People for the American Way and a former national president of the NAACP, is among those who responded to Hyde-Smith's comments about Sunday politicking.

“I know and love Mississippi — I’ve lived and worked there," Jealous wrote on Twitter. "The role that Black churches play in the state, including in encouraging civic engagement, is deeply inspiring. She knows exactly who she is targeting when she criticizes Sunday voting. Black voters will remember.”

Joyce White Vance, a University of Alabama law professor and former U.S. attorney for northern Alabama, tweeted: “Mississippi Sen Hyde-Smith objects to Sunday voting because it violates her religious beliefs. Does that mean the country can’t vote on Saturday because of Jewish beliefs? Or at times like Friday afternoon that conflict with Muslim prayer? She needs to read the 1st Amendment.”

Regardless of any criticism about her remarks, Hyde-Smith said she remains opposed to the Democrats' proposed election changes.

“The legislation before us today would nullify Mississippi’s successful voter ID law," she said in a statement. “Under S.1, in a federal election, an individual could walk into a polling place, register and vote on the spot, without ever showing any proof of identity or residency. I am totally against this and will fight it every day. We need to have confidence that our vote counts and that there’s one person for one vote.”