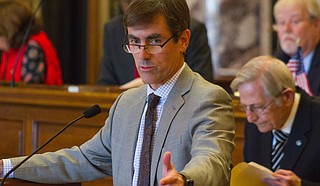 JACKSON, Miss. (AP) — State employees would receive a 3% raise and most public university and community college staff would receive at least a 1% raise under Mississippi lawmaker's latest budget proposal.

Mississippi lawmakers began voting Sunday on details of a state government spending plan for the year that begins July 1. The budget bills need approval from a majority of the 122 House members and 52 senators. Parts of the budget were being sent back for more work.

Hopson said the 1% pay raise is not automatic for each employee. Institutions will receive enough money to give all employees 1% raises but it will be up to each institution head's discretion how the money is allocated.

An individual employee can receive up to a 5% raise. Some employees may receive no raise.

“You may have an employee that you don't think deserves a pay raise, and we'll leave that up to the heads of those community colleges and IHL institutions to determine which employees they think need the pay raises,” Hopson said.

The higher education staff raises would go into effect July 1.

The state Legislature last gave a 3% pay raise to state employees during the 2019 session.

The state-funded portion of the budget will be nearly $6 billion, which is a slight increase over the current year. The total budget will be more than $21 billion, with money from the federal government and other sources, including the state gasoline tax.

Earlier this month, legislators authorized a teacher pay raise for the coming year — $1,000 for most teachers and $1,100 for newer ones. Budget writers say they were taking the necessary separate step to pay for the raise, which will cost about $52 million.

House and Senate budget leaders also said they agreed to set aside $23 million to cover the increased cost of state employees’ health insurance. Because the state is paying, the employees will not lose money from their paychecks.