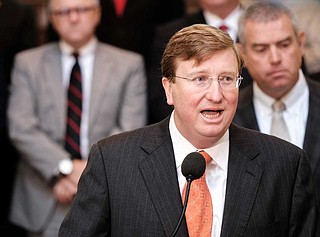 Mississippi Gov. Tate Reeves on Monday signed a bill authorizing a $1,000 pay raise for most teachers, and lawmakers worked to adopt final parts of state spending and borrowing plans for the year that begins July 1. Photo by Ashton Pittman

JACKSON, Miss. (AP) — Mississippi Gov. Tate Reeves on Monday signed a bill authorizing a $1,000 pay raise for most teachers, and lawmakers worked to adopt final parts of state spending and borrowing plans for the year that begins July 1.

Approving a teacher pay raise is a two-part process: First, it must be authorized. Then, money must be budgeted to pay for it. Reeves, a Republican, signed House Bill 852, which sets a $1,000 raise for most teachers and a $1,100 raise for those in the early years of the career.

“It's hard to imagine how difficult 2020/21 have been on our state's educators,” Reeves wrote on Twitter as he announced the bill signing. “But so many have stepped up and done what Mississippians do — whatever it took to help MS kids!”

The state-funded portion of the state government budget will be nearly $6.6 billion. It includes an increase in funding for early learning collaboratives. Those preschool programs are partnerships between public school districts and Head Start centers, child care centers or private or parochial schools.

“This is a real good year for education, as far as money going into it," said House Education Committee Chairman Richard Bennett, a Republican from Long Beach.

Bennett said the state will put an additional $8.2 million into early learning collaboratives, bringing the total for that to about $16 million. The state also will spend $5 million for math coaches who will provide extra instruction in low-rated school districts. The state has had reading coaches in some schools for several years.

Senate Education Committee Chairman Dennis DeBar, a Republican from Leakesville, said the state is adding $8 million to a supply fund for teachers, bringing that to $20 million.

Mississippi's total state government budget for the coming year will be more than $21 billion, which includes the nearly $6 billion in state-source money, plus money from the federal government and other sources, including the state gasoline tax.

The House on Monday adopted the final version of Senate Bill 2971, which would authorize the state to issue bonds to borrow millions for a variety of projects. It includes more than $86 million in bonds to fund repair, renovation and construction at public universities and $35 million for such projects at community colleges.