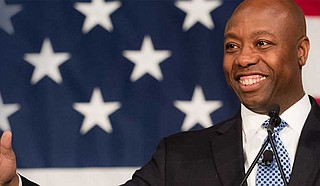 Jennifer O’Riley Collins writes that when Republican Sen. Tim Scott said “America is not a racist country,” he was both whistling to the GOP base and to those who know he is wrong. She urges people to join forces to face and respond to racism. Photo courtesy Sen. Tim Scott

Last week, with a tone toward unity and with accountability for this country apparent, President Biden delivered a poignant speech to the joint body of Congress. The landscape of this speech revealed where we are as a nation and where we can be.

As we sat in our homes watching and listening, we could see the chamber was not filled as the country continues to battle the COVID-19 pandemic. The implicit message, despite that more than 300,000 Americans have been vaccinated, was we must remain focused on this fight.

Two women sat behind the president for the first time ever in our nation's history. Women sitting, not in folding chairs where we have had to demand our place at the table but sitting in seats of power. This image was both empowered and inspired. The president asked that we as people "act with courage" and "come together to heal the soul of this nation."

I sat in my living room as this "dose of hope" settled in.

I sat, however, too long. As I was still sitting when U.S. Sen. Tim Scott, a South Carolina Republican, provided "the response" for his party. That response was a rhetorical SCUD missile. It was ballistic, targeted and explosive.

At one point in my career, I served as the intelligence officer for an Air Defense Artillery unit. I was responsible to know the capability and range, as well as recognize our enemy's weaponry and tactics. I recognized his speech immediately; it was like a SCUD missile system designed to engage important targets. Those targets are his base who heard his whistle—and you and l who feel compelled to react, to respond word for word.

His statement that "America is not a racist country" sent shrapnel flying all over America, but it was intentional and targeted. He was speaking to his party's base and at the same time he was scattering his party's opponents. The news and social media burned with constant repetition of this false narrative.

I want to remind us that we must be mindful of repeating someone else's narrative. In the military, "repeat" means to fire again with the same force and at the same target. There clearly is an adjustment that needs to be made. We must recognize the harm we, unintentionally, or maybe for some intentionally inflict when we "repeat." We must instead adjust our fire and respond with a concentration of our power.

Our power lies not inside lies, but in facing the reality that America is us. If we do not want our country to be categorically "racist," we must face the truth that racism built the systems that bind much of America. Here in our own home state, we need to examine the intent behind legislation that penalizes educators who wish to collectively bargain. We need to pull back the curtains and ask why this state would, while suffering from high rates of maternal mortality and other devastating diseases, perpetuate health-care disparity by refusing to expand Medicaid.

We need to challenge schemes that undermine the will of the people who voted for access to medical marijuana for their loved one struggling to live with debilitating illnesses. When this state voted to maintain the other flag years ago, and people continued to call for its change, "the people have voted" was the mantra of those who wanted to hang on to supremacist ideologies it represented.

Why is that not their message today? The people have spoken.

Let us not get angry when Madam Vice President "repeated." Let us listen to what she said afterward. She said "but"—a conjunction that connects contrasting or opposing viewpoints. Vice President Harris said "... but we also do have to speak the truth about the history of racism in our country and its existence today"

For many of us, the truth of that history continues to have vestiges that impact our present and our future. So, I encourage each of us committed to democracy to shake off the dust of the targeted attack, join forces regardless of whether you identify as Black, White, Asian, Indian, Woman, Man, Lesbian, Gay, Straight, Transgender, abled or other abled.

Together, we can build our America. Let us acknowledge the truth, both good and bad, and together we, like Langston Hughes, can declare: "America never was America to me. And yet I swear this oath—America will be!"

Jennifer Riley Collins is owner and principal consultant at J Riley Collins Consulting, LLC. She is an attorney and a retired Military Intelligence Colonel. In 2019, Jennifer was the Democratic nominee for Mississippi Attorney General.