Tht Kid Ker: Dropping Tapes and Making a Name for Himself 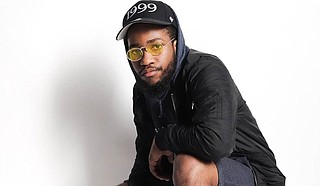 Parker DeLoach, a Jackson State University student who creates and performs music under the handle Tht Kid Ker, released his first album, “1999,” on Jan. 1, 2021, his birthday. His second full-body album, titled “No Love 2,” will release in late May. Photo courtesy The Murals

Parker DeLoach grew up in a home filled with music. The preacher's son listened to his father's favorite gospel tunes with his two brothers. The brothers began a music group with some friends and sang at area churches and events. Yet, when father Charles DeLoach was not around, his oldest sons would crank the radio to the sounds of Kanye West or Lupe Fiasco. Young Parker learned that music, too. On those days, he learned to appreciate hip-hop and rap as much as the spiritual. Those childhood musical experiences now influence DeLoach's personal music style.

The artist, who goes by Tht Kid Ker, didn't dream of a career in music. At Chicago Heights Bloom Township High School, recruiters approached the standout athlete for both track and football. For most of his young life, he believed that he would attend college and play sports.

A flyer for his school's drama club auditions, however, changed that trajectory.

"My junior year ... somebody said I should come to drama club," he says. "They were doing 'Shrek the Musical,' and that's my jam. I was a little conflicted, but then I ended up going, and that opened so many possibilities."

DeLoach began to indulge his creativity while performing in the club. There, the usually quiet and reserved student began to gravitate away from sports to his true passion: music. Once he enrolled in Jackson State University, he joined the group "Outspoken," a student-led creative arts collective that offers students a chance to share their works and receive constructive feedback. DeLoach says that the group has been a key to his time at JSU and his music.

Tht Kid Ker's sound features melodies that span gospel, rhythm and blues, hip-hop and rap—reflective of the music he remembers hearing during his childhood.

That sense of nostalgia has become a central theme to his music. His first mixtape, "1999," which released on his birthday, Jan. 1, of this year, is a collection of songs that focus on Parker's experiences with love, music and coming of age.

"I think '1999' is a mixtape that tells you kinda how I grew up and the things that impacted me over my life and the different experiences that I've encountered," he says. "It didn't go too deep because it was my first project, but it was more so of a fun-loving mixtape."

The album, which Wiz the Kid largely produced, has a sentimentality that resonates with listeners, DeLoach asserts.

"When (people) would tell me that the songs touched them kind of how they touched me or (when) they would tell me different lines, that's how I knew that I really connected with the people and that I gave them the warmth I got from making it and the warmth that I got from my childhood," he says. "It really hit me that people felt something from it."

The January music release was a follow-up to the artist's first EP album release on Soundcloud titled "No Love." The melodic album contained the catchy single "Dolla," which became the featured number in DeLoach's first music video.

He also performed on "A Magnolia Show," a music platform that features artists across the state. In the video filmed in front of a south Jackson mural with the quote "You can win as long as you keep your head to sky," he performs his first-ever released single "Away." He chose that particular piece because he felt that it best reflected the message that the show's producers were trying to convey.

"I felt like they wanted to connect a lot of different aspects and art forms. I found it pretty cool what they were doing and it was definitely a new idea," DeLoach says. "They told me the location that we were shooting at, and I thought the perfect song was 'Away,' which is about flying away from whatever barriers the world may set for us as dreamers and to go deeper—as Black people."

DeLoach will release his second full body of work called "No Love 2" in late May. The album will feature collaborations with independent rappers, singers and producers such as Jackson's Nahveyeh and DJ CJ from Chicago. The business administration major plans to use the degree to get his foot in the door at a major record label. His one surety: Music will be a part of his life no matter what he does.

"I just keep making music that means something to me and possibly means something to someone else, too," DeLoach says. "If it takes me somewhere, it does. If it doesn't, it really doesn't matter. I do it because I love the music."