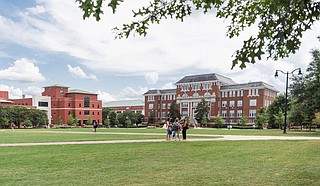 Overall enrollment in Mississippi’s public universities dropped by less than 1% in the past year, according to figures released Tuesday by the universities’ board of trustees. Photo courtesy Robby Lozano/MSU

JACKSON, Miss. (AP) — Overall enrollment in Mississippi’s public universities dropped by less than 1% in the past year, according to figures released Tuesday by the universities’ board of trustees.

A total of 76,510 students are studying at Mississippi public universities this fall, compared with 77,154 last year — a 0.8% decline. That's after public university enrollment went down 1% between 2019 and 2020, according to the board.

Figures for individual schools varied. The most drastic change in the past two years has been at Delta State University in Cleveland. The student population declined by just over 9% between 2020 and 2021. The population has declined by 27% between fall 2019 and fall 2021.

Delta State spokesperson Brittany Davis-Green said Tuesday that the university is continuing its recovery from a significant enrollment decrease caused by the compounding effects of the COVID-19 pandemic, declining high school populations in the state and a national trend showing a reduced number of high school graduates enrolling in college.

She said the school has bolstered its recruitment efforts and saw growth in its freshmen class this year. In fall 2021, Delta State welcomed 267 first-time freshmen, 75 more than fall 2020, she said.

"Delta State has also implemented a robust, multi-channel recruitment marketing campaign that will assist in identifying and recruiting its evolving target population," she said.

The overall student population at Mississippi State University, on the other hand, increased for the seventh year in a row. The school of just under 23,000 students increased its population by 0.4% between 2020 and 2021.

“We’ve encountered a health crisis like none we’ve seen in our lifetime,” said Keenum, who pointed out that the university's class of first-time freshmen increased by more than 5% in the past year. “Our employees have risen to the task and done a phenomenal job of finding meaningful ways to engage with, teach and assist our students."

The student population at the Mississippi University for Women saw a decline of just over 8% between this year and last year. The number of students enrolled dropped to 2,477 from 2,704.