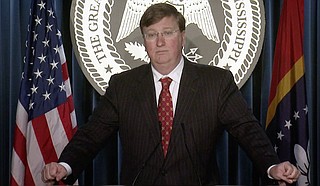 Mississippi Gov. Tate Reeves says he wants legislators to make more changes in a proposal to create a medical marijuana program in the state. Photo courtesy State of Mississippi

The Republican said at a news conference Monday that he wants tighter limits on the amount of marijuana people could buy and he wants to reduce the content of THC, the compound that produces a high.

“Clearly the levels that are in the current drafts of the bill that have been floating around are higher than I am comfortable with,” he said, according to WLBT-TV.

Reeves said he wants a “true medical marijuana program, with strict rules in place,” not a program that would allow recreational use of the drug.

In November 2020, Mississippi voters approved an initiative to create a medical marijuana program. State Supreme Court justices overturned the initiative in May, ruling that Mississippi’s initiative process is outdated and unworkable.

House and Senate negotiators have been working to create a program since then. After releasing an initial proposal weeks ago, they made changes on taxes and on the size of growing facilities that would be allowed.

Reeves has said he could call legislators into special session if he and the negotiators can agree on a plan. The next regular session begins in January.