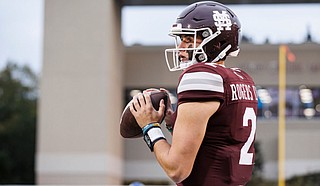 Only one college football team in the nation has defeated three top-25 teams and three teams ranked in the first College Football Playoff Rankings as the season enters its final month: Mississippi State University.

Behind a historic performance by MSU quarterback Will Rogers, the Bulldogs knocked off the University of Kentucky 31-17. MSU previously defeated North Carolina State University and Texas A&M University.

The Brandon, Miss., native wasn’t done rewriting the MSU record book against the Wildcats. He broke Dak Prescott’s record for single-season completions with 327 and counting.

His seventh 300-yard passing game ties a record by Prescott set in 2015. Rogers recorded his ninth career 300-yard game, which also tied Prescott. The quarterback finished his night with 344 yards and a touchdown.

The 566 career completions for Rogers is second all-time in school history behind Prescott who finished his career with 734 completions. His 19 touchdowns is currently fifth in the single-season records.

The sophomore quarterback’s 30 career touchdown passes currently sits in eighth place in school history. By the time the season ends, Rogers could rewrite the school record book for single-season and career marks.

MSU sits at 5-3 overall and 3-2 in SEC play with one win needed to become bowl eligible for the second straight season under coach Mike Leach. MSU travels to face the University of Arkansas on Saturday, Nov. 6.

If MSU wins it will be the fourth victory over a team ranked in the top 25 at some point in the season. The Bulldogs and Razorbacks will kickoff at 3 p.m., and the SEC Network will broadcast the game.