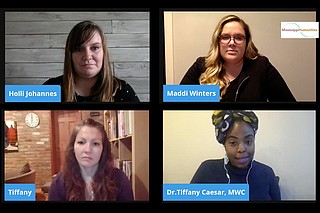 Tiffany Burns started cross-stitching at a young age, first silly things like cows and chickens. But as she got older and followed others on social media who stitch, she realized there was more to the art form. By her 20s, she was taking the hobby more seriously.

Chief among the artists that she found was Holli Johannes, founder of the “Stitch Their Name Memorial Project.”

“I started following her and really liked her portraits. When she asked for volunteers (for the project), I immediately jumped at the opportunity. I had no idea what all it was actually going to entail,” Burns said during the virtual “The Foundation of Stitching: Racial Violence and Advocacy” panel on Oct. 28.

Cross-stitching is a form of embroidery where stitches cross each other diagonally to form an X-shape in the middle. The hobby was first popular in the 1960s when women had more leisure time. Now, sticking is also a way for artists to say that Black lives matter.

The “Stitch Their Names Memorial Project: A Quilt Exhibition” is currently on display at the Margaret Walker Center on the Jackson State University campus. It honors African Americans whose lives were lost to police and others due to racial hate and bigotry. The two-quilt art piece contains 116 cross-stitched portraits that 75 volunteers across the country and beyond collaborated to create. The project’s website features written biographies on those honored within the quilts.

Gibbs and Green, Stitched and Remembered

Oregon native and high-school math teacher Holli Johannes started “Stitch Their Names” in July 2020 during the height of the pandemic. The participants who volunteered for the project hailed from different racial backgrounds—Black, Latino, Asian, white—as well as ages from teenagers to the elderly.

Johannes coordinated with different stitchers via social media and assigned them iconic individuals to stitch based on their background and experiences, as she explained at the digital event. For example, Tiffany Burns, an Alabama native, grew up seeing prejudice, racism and xenophobia enacted on people of color, leading Johannes to assign her two individuals to stitch: Phillip Lafayette Gibbs and James Earl Green.

Mississippi Highway Patrolmen opened fire on Jackson State University’s campus, killing Gibbs, a student at the college, and Green, a bystander, and injuring 12 others the night of May 14, 1970.

“I started doing some research, and that’s how I found (the Margaret Walker Center). I was trying to get ahold of Phillip’s sister because I wanted to get permission,” Burns said. “Actually being able to integrate the two things, the thing I liked to do as a hobby and being able to use it for an actual purpose, to actually tell people’s stories, was really important.”

“It was really a unique opportunity also to be part of a community knowing we were all working towards the same goal,” Burns added.

Margaret Walker Center Director Robert Luckett connected Burns with Gibbs’ family, which opened the door for an opportunity to display the exhibition at Jackson State University. “Stitch Their Names Memorial Project: A Quilt Exhibition” is on display at Ayers Hall on Jackson State’s campus from Oct. 25 to Dec. 17.

“We’re so grateful, so humbled and really appreciate that you all are willing to display them and share them with your Jackson State community,” Johannes told the panel moderator.

‘Her Story, His Story, Their Stories’

Maddi Winters, a social worker from Michigan, was also on the Zoom call at the virtual “Foundation of Stitching” event. Johannes had assigned her Emmett Till and Nina Pop, a Black transgender woman who was stabbed to death in Sikeston, Mo., on May 3, 2020, weeks before George Floyd’s murder.

“What was really interesting is, specifically for Nina, I could not find much information about her. We’re reading these stories, and we’re trying to research more about what was going on with these folks, and there’s just not a lot of information,” Winters said of Pop.

However, Winters managed to find plenty of information about Emmett Till, whose story was familiar to her, although she didn’t know specifics. While conducting research on Till, Winters noticed disparities among what tragic stories are actively taught in schools and prioritized in the media.

“I just kept thinking about the white woman (Gabby Petito), who recently went missing and was murdered, and how you couldn’t get on social media and not hear the story,” Winters said. “It was national news, and here we have people of color that are missing and murdered everyday, and we’re not hearing these stories.”

Although the faces of missing Black and Brown people may circulate on our Facebook pages, where close family, friends and community members can see, these faces aren’t making national news as often, and the FBI is not getting involved, she said.

“This white woman that’s been missing, we’re hearing about her whole life. For Nina, all I could find was that she was bright and happy—that’s how people described her—and that she worked in fast food,” Winters said. “She was a daughter, a sister, and that’s the extent of her (public) story.”

Winters said it speaks to what society is valuing, which translates into what people are thinking about in their day-to-day lives. People appear to largely have the mindset that if something doesn’t directly affect them, then it doesn’t merit their attention, she said.

“Being a part of this project brought it full-circle that these are stories that need to be shared, and people need to know. We’ve got to reach a different demographic of fiber artists and people that follow us on social media that maybe wouldn’t have heard the extent of these stories,” the Michigan native said.

Johannes said she believes that expressing art as a form of activism is more humanizing, resulting in art that evokes emotions. With the “Stitch Their Name” project, she says the participants are really putting a face to names people may or may not have heard about in the media.

“I also think that with these quilts in particular, there’s a power in each individual cross-stitches that was made, but there’s something even more impactful with them all being together,” Johannes said.

“There’s 116 portraits; that’s only a fraction of the Black lives that have been impacted by white supremacy in this country. And still that 116 together is an overwhelming number when they’re all seen collectively.”

Winters said cross-stitching lends itself to so many different types of creativity while also sending a strong message. She has had conversations with people who possess different beliefs than she has and at a certain point in the conversation, she sometimes realizes the person isn’t going to change their mind.

“This gives a different (way) of having that conversation and still bringing awareness by being able to utilize social media in the creative process to reach a whole different group besides your immediate support and people around you,” Winters said of the artwork,

“I think for me to create is to resist,” Burns added to the virtual discussion.

Burns said that when she looks at instances of police brutality and racists harassing people of color, she sees the aggressors’ focus is destruction. But quilting and cross-stitching involves gentleness, the use of soft fabric and thread.

“Their whole focus is this hard, angry, violent death, and we are the antithesis of that,” Burns said. “We are a group of people who come together, who use our gentleness and our time and our creativity to combat that and say we’re going to create rather than destroy.”

To learn more about the “Stitch Their Name” project, visit its site here. “Stitch Their Name Memorial Project: A Quilt Exhibition” will be on display at the Margaret Walker Center on JSU’s campus from Oct. 25 to Dec.17. The exhibit is open to the public on weekdays from 8 a.m. to 5 p.m. and by appointment. You can visit the center’s site here.