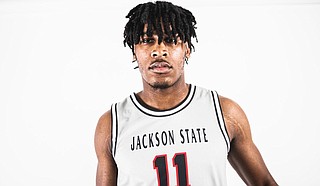 During last season’s strange COVID-19-impacted college basketball season, Jackson State University started the season 0-5. That was before the Tigers started Southwestern Conference play and JSU ran through the SWAC.

Jarrett ended up making the All-Tournament team in his final season at JSU. The Tigers didn’t play in the postseason after falling in the conference tournament.

While Jarrett is gone, JSU does return Mckinnis for the 2021-2022 season. The Tigers do return McKinnis for this season as he returns for his senior season.

McKinnis returned this season as the 2021-2022 Preseason SWAC Defensive Player of Year and Preseason First-Team All-SWAC. He finished second in the nation in rebounding and led the SWAC in rebounding with 13.2 per game.

The Pearl, Miss., native averaged 12.5 points per game and 2.1 blocks per game with nine double-doubles last season. He led a defense that held opponents to 62.8 points per game in conference contests.

In the preseason predicted order of finish, league coaches and sports-information directors picked JSU to finish third in the league. They picked Texas Southern to finish first and Prairie View A&M to take second place.

These sports professionals picked Alcorn State University to finish seventh and Mississippi Valley State to finish dead last. SWAC play doesn’t open up until early 2022 with the Tigers and Braves opening conference play against each other.

JSU opened the 2021-2022 season on the road against the University of Illinois. The No. 11 ranked Fighting Illini cruised to a 71-47 victory over the Tigers.

While it was a blowout win for Illinois, McKinnis stuffed the stat sheet with his play. The former Brandon High School star finished with a double-double with 11 points and 12 rebounds. He also added five steals and two blocks in 36 minutes of playing time.

JSU begins the season by playing the first 12 games on the road. The Tigers don’t have a home game until Wednesday, Dec. 29, against Southeastern Baptist College.

McKinnis and the Tigers hit the court again on Friday, Nov. 12, at Louisiana Tech University with tip off at 6:30 p.m. JSU’s next game will be televised on ESPN+ on Tuesday, Nov. 16, against California Baptist University.