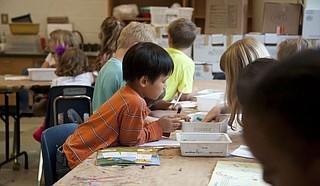 The percentage of Mississippi children considered ready for kindergarten has fallen during the pandemic, according to state test results released Friday. Photo courtesy CDC on Unsplash

JACKSON, Miss. (AP) — The percentage of Mississippi children considered ready for kindergarten has fallen during the pandemic, according to state test results released Friday.

The Kindergarten Readiness Assessment showed 31.8% of kindergarteners scored kindergarten-ready this year, according to the Mississippi Department of Education. That is down from 36.6% in 2019 and 36.1% in 2018. Scores from 2020 were not released.

“The Kindergarten Readiness Assessment is further proof of the pandemic’s impact on students in the state,” Carey Wright, the state superintendent of education, said in a press release.

“Mississippi’s kindergarten teachers are outstanding. Yearly, their hard work leads to significant gains for the state’s youngest students, and I anticipate seeing those gains when students are retested in spring 2022," Wright added.

The score to be considered ready for kindergarten is 530, which means students can identify most letters of the alphabet, match most letters to their sounds and are building their vocabulary and understanding of print. Research shows 85% of students who score 530 or higher on the assessment at the beginning of kindergarten are proficient in reading at the end of 3rd grade, the department said.

The Clarion-Ledger reports that the 2021 Pre-Kindergarten Readiness assessment also showed a decline in readiness with 13% of four-year-old students tested at or above the threshold. That is down from nearly 16% in 2019.

The newspaper reported that a separate report showed about 10% of students in other Pre-K programs, such as Title I and special education programs, met state standards. Roughly 14.3% of students met the same standard two years ago.