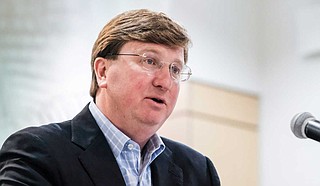 Mississippi Gov. Tate Reeves' proposed budget for the upcoming year includes money for teacher pay raises, a water and sewer improvement grant program and a plan for eliminating the state income tax, according to recommendations he released Monday. Photo by Ashton Pittman

“We have to ask ourselves, ‘Are we going to fight back against the violent crime that in some areas has gone unchecked?” he said at a news conference. “Are we going to allow the lie that many children are inherently racist by birth to be taught in our classrooms?’”

The next state budget year begins July 1. In addition to the usual annual task of allocating money to departments to keep the state running, Mississippi leaders will be charged with deciding what to do with $1.8 billion coming to the state in federal funding from the American Rescue Plan.

Legislative leaders will file a separate set of recommendations in the coming weeks. Lawmakers often ignore budget suggestions made by the governor.

In his budget proposal, Reeves made several recommendations for how that federal money should be spent. He suggested $100 million go toward the creation of a water and sewer grant program to update the state's “critical infrastructure” and that $200 million go toward broadband expansion efforts.

Reeves' proposed teacher pay be increased by $1,300 per year, effective immediately, with an additional $1,000 per year in the two years following. This $3,300 raise will cost approximately $71 million in the first year, Reeves said.

He also proposed a $3 million increase in funding for math coaches and a $2 million for computer science instruction training for teachers.

Like last year, a major talking point for the governor was his plan to eliminate the individual income tax. He said he wants to allocate $1 billion in excess state revenue towards this goal.

Reeves said he is calling on the Legislature to pass a law banning the teaching of critical race theory in Mississippi public schools.

Critical race theory centers on the idea that racism is systemic in the nation’s institutions and that they function to maintain the dominance of white people in society. Nationwide, there is little to no evidence that critical race theory itself is being taught to K-12 public school students, though some ideas central to it, such as lingering consequences of slavery, have been.

Reeves called critical race theory “a push from radical leftists across the nation to teach our children a lie that this country is fundamentally racist and that your skin color makes you inherently racist.”

Instead, he is proposing a $3 million investment in “patriotic education," similar to a program he suggested last year that lawmakers ignored.

Reeves said he is proposing a requirement that the counties distribute confirmation notices to each person on a voter roll in the state of Mississippi and remove anyone who fails to respond, update voter registration information or vote at least once during a period of four consecutive years.

“We must always do everything we can to ensure that each person voting in our election is legally allowed to do so,” he said.

Also, Reeves said the past 18 months — which have seen an increase in nationwide protests against police brutality — have been “one of the most difficult times in our nation’s history for our law enforcement officers.”

“Unlike some of the blue states, and some of the democratic control cities, the state of Mississippi and our cities and counties back the blue, we recognize just how hard their job is and what they do every single day to keep us safe,” he said. “The fact of the matter is this: We need more police officers.”

He said he is proposing $5.5 million to double the size of the Capitol police force from 75 to 150 officers and $5 million to attract “law enforcement officers from around the country who are making a mass exodus from those more liberal states that perhaps do not support them due to their unsupportive policies and politicians. ”