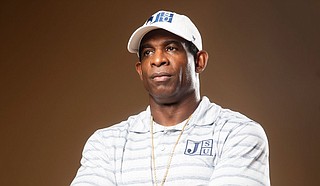 The Braves went on to win the SWAC East for the sixth consecutive year. ASU went on to defeat Southern University in the SWAC Championship Game. The Braves’ season ended in a 20-point defeat to North Carolina A&T University.

Alcorn State decided not to play the spring season of 2021 after COVID-19 postponed the 2020 season. Jackson State played a spring schedule as new head coach Deion Sanders breathed new life into the program.

While Alcorn State sat out the spring season, Jackson State was laying the foundation for this fall. The Tigers went 4-3 and Sanders got a start on reshaping the program in his image.

Now the two longtime SWAC rivals are in opposite divisions as Alcorn State moved to the SWAC West and JSU stayed in the East. Florida A&M University and Bethune Cookman University joined the SWAC and were added to the East Division.

Jackson State sits on top of the East with a perfect 7-0 record in SWAC play. Alcorn State is currently in second place in the West with Prairie View A&M University leading the division.

The Tigers and the Braves are set to meet this Saturday, Nov. 20, in Jackson, Miss. JSU has already clinched a spot in the SWAC Championship Game. ASU must win this game and get some help to have any hope of a rematch in the title game.

Alcorn State could try to control the game with their rushing attack. The Braves are the fourth best running team in the conference, averaging 167.1 yards per game.

Jackson State enters the game with the best passing defense in the SWAC only allowing 153.7 yards per game. The Tigers’ offense is second in the conference in passing yards with 267.4 yards per game.

This game also features two 2021 Conerly Trophy finalists. JSU quarterback Shedeur Sanders has led the Tigers to an undefeated record in SWAC play and first division title since 2013. Alcorn State defensive back Juwan Taylor will try to stop Sanders from throwing the ball on the Braves.

This game feels like it will be close for the first half with both teams feeling each other out. The second half is when JSU will take control and finish a perfect regular season in SWAC play. Alcorn State’s dream of a spot in the SWAC Championship game will die in Jackson.

The Tigers will lead 28 to 21 after the first two quarters. Then JSU shows a new beast has risen in the east and cruises to a 48-28 victory.