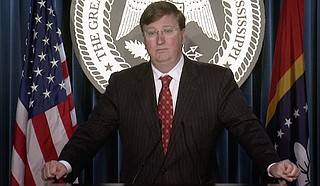 The Republican Reeves told NBC's “Meet the Press” that he believed 1973's Roe v. Wade decision, by which the high court legalized abortion nationwide, should be overturned.

He also said he believed a 1992 case that reaffirmed Roe was wrong, accusing justices of allowing “politics to play into their decision making.”

Mississippi Republicans have long vied to send test cases to the Supreme Court with the aim of overturning Roe. Anti-abortion views are an important pillar of conservative politics in the state.

Mississippi's law would ban abortions after 15 weeks of pregnancy, well before viability. The Supreme Court has never allowed states to ban abortion before the point at roughly 24 weeks when a fetus can survive outside the womb.

Lower courts blocked the Mississippi law, as they have other abortion bans that employ traditional enforcement methods by state and local officials. The Supreme Court had never before even agreed to hear a case over a pre-viability abortion ban.

Mississippi's only abortion clinic in Jackson offers abortions up to 16 weeks of pregnancy.

Reeves argued that Mississippi's law is not out of line because many European countries restrict abortion after the first trimester.

“Mississippi will still have a law on the books in which 39 countries, 39 out of 42 in Europe, have more restrictive abortion laws than what I believe to be one of the most conservative states in the United States,” Reeves said.

The governor deflected questions about how he squares his desire to restrict abortion with his calls for personal freedom in opposition to COVID-19 vaccine mandates.

“The difference between vaccine mandates and abortions is vaccines allow you to protect yourself,” Reeves said. “Abortions actually go in and kill other American babies.”