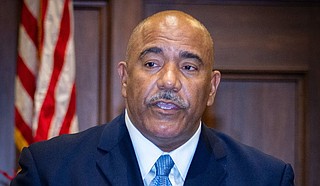 After a 3-2 vote ousted Hinds County Supervisor David Archie from his role as vice president on Wednesday, Archie found himself under arrest after a Thursday board meeting dispute between supervisors. He now faces multiple charges, including destruction of property and resisting arrest. Photo courtesy Hinds County/Sharon Sims

Just one day after the Hinds County Board of Supervisors voted 3-2 in favor of removing Hinds County District 2 Supervisor David Archie as vice president and president-elect, Sheriff’s Deputies took Archie into custody and charged the Supervisor with five misdemeanors after an altercation during the Sept. 30 board meeting resulted in his forceful removal.

On Wednesday following a long-standing feud between Archie and President Credell Calhoun that included calls of corruption from Archie, Calhoun, District Four Supervisor Vern Gavin and District Five Supervisor Bobby McGowan voted to remove Archie from the office of Vice-President. District One Supervisor Robert Graham dissented in the vote.

“I speak for the people of District 2, and I’m going to say it again, we have two dummies in this place,” Archie said in reference to Gavin and McGowan, while Archie has referred to Calhoun’s behavior as that of a “dictator,” and often calls him a “40-year con man.”

Thursday’s altercation began after Archie complained of receiving the day’s agenda without sufficient time to read through the document before taking a vote. Archie proceeded to call Gavin and McGowan “dummies,” to which Calhoun used his gavel to try to restrain Archie’s derogatory speech. Archie would not restrain himself, prompting Calhoun to call for and receive a majority-yes vote to remove Archie from the premises.

The Hinds County Sheriff’s Office released Archie without supervision that same day, pending charges including breaching the peace, disorderly conduct, destruction of public property, prohibition of public business being conducted in a formal meeting, and resisting arrest. Video of Archie’s removal and pursuant property damage in the form of COVID-19 safety plexiglass is available here.

“The law does not respect person or position, and anybody that violates the law will be held accountable just as any other citizen in Hinds County,” Hinds County Interim Sheriff Marshand Crisler said in a press briefing after the incident.

Archie held his own press conference later that day, requesting a U.S. Department of Justice investigation into Calhoun for civil-rights and corruption violations. Archie maintains that his role is to root out corruption in Hinds County and that his arrest violated his freedom of speech.

“I’m taking hits from all different types of people,” Archie said. “This is politics at the highest level. … We have the freedom of speech whether we are in the boardroom, a church house, or in the public. Freedom of speech was clearly violated this morning.”

Archie maintains that the plexiglass damage resulted from his own bracing against it in defense from an “unlawful arrest” and insists that Wednesday’s vote to remove him as vice president is invalid and that he still holds that office.

Archie said he plans on attending Monday’s board meeting.

“If they want to arrest me again, come on,” he said.