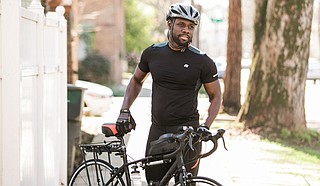 Soul City Cycling officially launched earlier this year and now has 38 members, with several weekly rides around Jackson. They aim to bring more people into the sport and increase visibility for Black Mississippians in cycling. Photo courtesy Fortune Vieyra on Unsplash

JACKSON, Miss. (AP) — When Moss Point High School teacher Louis Henderson first started bringing his bike into his classroom to keep it safe before after-school rides last year, his students of all races would joke that he was doing “stuff that white people do.”

Then he started showing them videos of his rides and maps of his routes. He told them about Marshall “Major” Taylor, a Black man from Indianapolis who won the title of fastest cyclist in the world in 1899.

“Now they’re just like used to me riding,” he said.

Henderson, who bought his first bike at the start of the COVID-19 pandemic, is a member of Mississippi’s first Major Taylor Cycling Club, the Jackson-based group Soul City Cycling.

The group officially launched earlier this year and now has 38 members, with several weekly rides around Jackson. They aim to bring more people into the sport and increase visibility for Black Mississippians in cycling.

Soul City Cycling is part of a wave of growth for the organization, said Bill Gaston, president of the Major Taylor 1899 Association, Inc., a national umbrella group for Major Taylor clubs. Louisiana, Alabama, Arkansas, Tennessee, North Carolina, and Florida now all have clubs. Texas has five.

For Soul City Cycling President Arree Williams, the most inspiring story from Taylor’s life is the Six-Day Race. For six days straight in 1896, Taylor rode his bicycle around a track at New York City’s Madison Square Garden. He was the only Black man competing against some of the world’s best cyclists, some of whom called him racial slurs during the competition.

At the time, Williams pointed out, the country was only 30 years past the Emancipation Proclamation. Black Americans’ Reconstruction-era hopes for political representation and equality were fading as southern legislatures restricted voting and legalized segregation.

“This Black man, this African American gets into a sport that’s dominated by the white Americans, and he’s able to get past all that adversity and become a champion and gain respect,” he said.

STARTING WITH A BIKE

Kendra Patterson of Byram bought a bike in 2019. Then she fell in love.

“It has really changed my life in a way that I almost can’t even explain it,” said Patterson, vice president of Soul City Cycling. “I don’t enjoy the gym. I don’t enjoy running. I love cycling. And I didn’t know that I loved it until I got back on a bike again.”

Every cyclist interviewed for this article had a story like Patterson’s. Most people bought a bike because they were looking for a low-impact way to stay in shape. Five miles became 10, and then 20. Fifty miles seemed intimidating, but soon 100 (also called a century ride) was an attainable goal.

Now, the members of Mississippi’s Major Taylor club are evangelists for cycling. Patterson points out that given the state’s high and rising obesity and diabetes rates, getting more people out on two wheels could save lives.

But they also know what it is like to be one of the few, or even the only, Black cyclist on a ride.

At the professional level, there are vanishingly few Black racers (though champions like Los Angeles-based Justin Williams are working to change that). In recreational cycling, one bike shop owner told Bicycling Magazine last year that the industry “defaults to this lens of a white, cisgender, heterosexual, able-bodied man with class privilege.”

Williams said that when he first started riding in 2010, he attended a regular ride on Tuesdays that drew as many as 70 people. He was one of no more than three Black men cycling there on any given week. And, as a beginner, he was usually at the back of the pack.

“I don’t know if people really understand that intimidation factor, when you’re trying to get into something new, and you’re not into it with people that you’re familiar with or that you tend to be more comfortable with,” he said.

Denise Handy of Clinton recalls one ride with a mostly white group. When they stopped for a break, another woman, who isn’t Black, said she had run out of water. Handy offered her an unopened bottle, but the woman wouldn’t look at her. Instead, she took a bottle from a white rider, though he had already drank from it.

Williams first encountered a Major Taylor club when he participated in Greenwood’s Bikes, Blues and Bayous ride a few years ago. The contingent from Arkansas, the Rock City Riders, impressed him.

“They were so measured and so exact and in sync and in tune, it was almost like a military team on bikes,” he said. “It was all Black cyclists, you know, and that was different to me.”

At the time, though, he didn’t know enough Black Mississippians in cycling to think about starting a club here.

But gradually, the future members found each other one by one.

A friend introduced Williams to one rider, who then brought in two more cyclists, and then more.

“And then Charles knew Doc, and Doc knew Greg, and we knew David, and we just all got together,” Williams said.

Earlier this year they decided to establish themselves as an official Major Taylor Club. This summer, the group traveled to rides in Atlanta and Tulsa, Oklahoma, where they joined the Black Wall Street 100 to commemorate the 100th anniversary of the Tulsa Race Massacre.

Handy, who’s known in the group for her competitive streak, remembers the rush of cycling down a huge hill in Tulsa, at a speed of almost 40 miles per hour.

“There was a little bit of fear in me as well — what if I hit that pavement?” she recalled. “When I get on my bike pretty much, there’s a rush every time.”

At the bottom of the hill, they found themselves overlooking a beautiful lake. They stopped for a group photograph.

MAJOR TAYLOR GROWTH ACROSS THE SOUTH

Gaston, who lives in Chicago, said there are now about 5,000 Major Taylor club members across 25 to 30 states. The first was founded in Ohio in 1979. Mississippi’s new club is part of a wave of growth for the organization.

“The George Floyd situation, some of those situations have led to kind of this outreach of positivity and cycling,” he said.

The COVID-19 pandemic also led people to seek opportunities for spending time outdoors. And, as Major Taylor clubs grew, more people saw their riders and wanted to learn how to get involved.

When riders stop for a break and curious passers-by want to chat, one of the first questions is usually “What is Major Taylor?” From there, club members share his story and challenge possible assumptions about Black Americans.

It’s particularly powerful to see that “positive image” across the South, he said.

“Through all the adversity that Mississippi is known for, they still ride down there,” he said. “They’re growing a club that is a presence.”

Membership is open to anyone who wants to ride “in the spirit of Major Taylor,” Williams said.

A SATURDAY MORNING IN WOOLMARKET

Before 7 a.m. on Sept. 25, about 20 cyclists from across the state and Louisiana gathered in the parking lot of the Woolmarket Community Center. The weather had turned cool and crisp just in time for the 60-mile ride Henderson planned, heading up mostly two-lane roads into Stone County.

As riders pulled arm sleeves out of their cars and put on cycling shoes, Chuck Jackson explained members’ nicknames.

Handy is Daring Diva Denise, because she likes to push herself on rides (off the bike, she’s also a licensed hiking guide). Leslie Dunbar is Sparkles, after the light-colored flecks on her black bike. Jackson is Spinner, because when he first started riding, he was always spinning his wheels on a low gear.

For the first time, the Soul City Cycling members were riding in new kits designed by Jackson, Dunbar, Patterson and Handy. The colors — blue, white, yellow and red — were inspired by the new Mississippi state flag.

A few minutes after 7:15, the cyclists rolled out onto Old Woolmarket Road.

“All aboard,” one rider shouted. “This train’s moving.”