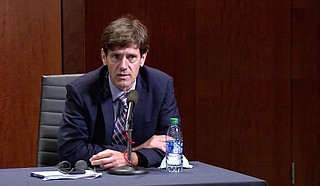 COVID-19 is on the decline in Mississippi, as the state’s fourth wave of the virus steadies into an average rate of less-than-800 new cases per day for the past seven days. During an Oct. 8 press briefing from the Mississippi State Medical Association, health leadership discussed upcoming challenges for the fall, including combating ongoing COVID-19 misinformation.

“We're really pleased to see an ongoing decline in average daily cases where we're averaging around 700 to 800 daily cases on a seven-day rolling average,” State Health Officer Dr. Thomas Dobbs said. “That's a significant improvement from the peak of where we were averaging over 3,500 cases a day, so that's fantastic.”

Hospitalizations are in decline, and more beds are opening up in intensive-care units. Mississippi saw 820 cases and 41 deaths today. Deaths likely will remain high even as cases wane, however.

“Deaths will lag cases because it takes a while for folks to get sick,” Dobbs said.

Seeing so many preventable hospitalizations and deaths is difficult for Dobbs and other physicians and health-care workers..

“Part of the sad thing is, though, we continue to see steady admissions across the state for new patients who are sick, desperately ill with COVID, and we're recording deaths every day,” Dobbs added. “So although the magnitude of the tragedy is starting to decline, we're going to continue to see ongoing, personal or tragedy that sadly is almost entirely preventable.”

Praise for Monoclonal Antibodies, But ...

Dobbs praised Mississippi’s use of monoclonal antibody treatments, as health-care workers administered more than 54,000 doses alone during COVID-19’s delta wave. He noted, however, that vaccination provides better protection against the worst outcomes from the virus.

“We're a big fan of the monoclonals in Mississippi, but the mortality reduction is not as good as the vaccine,” Dobbs said. “You're not getting the best choice available to protect yourself.”

“We haven't been able to link the death of one person to the vaccine, and we've had almost 10,000 deaths (due to COVID-19),” Dobbs said. “That's a phenomenal track record.”

Dobbs says a main factor in the state’s high death toll—besides lack of vaccinations—is a lack of seriousness about the virus.

“I think that one of the most important things (contributing to the still-staggering case numbers in Mississippi) is not taking COVID seriously,” Dobbs said. “I think it's one thing to have an honest debate. It's another thing to deny reality.”

“We've had too many people deny reality because it's inconvenient,” he said. “COVID’s deadly; it's killed almost 10,000 people. That's just what it is. It's just a virus. And we can either choose to fight the virus, which is what our job is and what my job is and all of us here, or we can stick our heads in the sand, let it roll over us like a steamroller, and that's the wrong approach.”

MSMA member Dr. Jennifer Bryan lamented the lack of trust she sees from patients with regard to the virus.

“If we were dealing with cancer right now, and you asked me who the best oncologist was, well you’d go see him, or if you had heart disease right now and we suggested stints, you’d probably go get them, and this is the same thing,” Bryan said.

"There's a level of trust there that we're just unable to communicate in the same language,” she said. “It is impossible really to get down into the nitty gritty of immunology and all of that to explain.”

Dobbs says MSDH had a model that predicted about 3,000 deaths in Mississippi due to COVID-19. They based the model on the flu, while replacing flu infection and mortality rates with those seen in COVID-19. The model was accurate, Dobbs says, except for not including the effects from misinformation.

“What we didn't put into the model is all this other stuff, right? Social media. We didn't put in there this sort of cultural phenomenon of denialism of the pandemic; that's really what the challenge has been,” Dobbs said.

“It's a two-sided coin,” Dobbs said. “We've lost too many, but we've saved a lot. We just need to keep going forward. We're not done with this, so we can still make sure we can save more lives.”