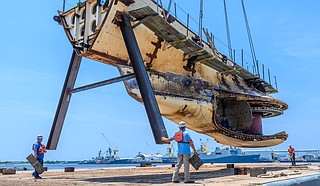 JACKSON, Miss. (AP) — Thousands recently rallied against COVID-19 vaccine mandates at protests held on Mississippi’s coast and in its capital.

Upwards of 1,500 workers and their family members waved homemade signs and flags along U.S. 90 near the entrance to Ingalls Shipbuilding in Pascagoula on Friday, the Sun Herald reported.

The company, which builds 70% of the U.S. Navy’s warships, is one of the largest federal contractors and state employers. While some protestors expressed medical concerns about the vaccine, most were angry that the requirements violate their personal freedoms.

President Joe Biden on Sept. 9 ordered sweeping new federal vaccine requirements for as many as 100 million Americans, including private-sector employees as well as health care workers and federal contractors.

The expansive rules mandate that all employers with more than 100 workers require them to be vaccinated or test for the virus weekly. Biden is also requiring vaccination for contractors who do business with the federal government — with no option to test out.

An Ingalls spokesperson told the Sun Herald in late September that less than half of the company’s 11,500 employees were vaccinated. On the coast overall, the number of people who have received the vaccine falls behind the state average and well below the national rate.

Some Ingalls employees, including Justin Bryant, traveled three hours north the next day to protest the vaccine requirement in Jackson alongside hundreds of other Mississippians.

A few blocks away, across the street from the Capitol, an estimated 1,400 people attended another rally hosted by the Mississippi Parents for Vaccine Rights.

Speakers at both Saturday demonstrations amplified conspiracy terminology and inaccurate information. Attendees also chanted “Fire Dobbs,” referring to the state health officer who has been outspoken about COVID-19 misinformation.

“People just need to pay attention to what is really going on, and for heaven’s sake, please do not get your news from social media,” Dr. Thomas Dobbs told the Sun Herald in an interview.