They Said Emmett Till’s Name to Me. Now, I Say it for Myself. 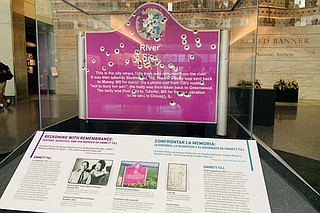 Riddled with bullet holes, the River Site sign on the Emmett Till will stand for three months in the Smithsonian Museum of American History in Washington, D.C., before returning to its final resting place in the Mississippi Delta. Photo by Taylor McKay Hathorn

The first time I ever heard someone say Emmett Till’s name was in Room 504 at Wayne County High School. My Mississippi studies teacher was Callie Taylor, a Black woman who had marched in the Civil Rights Movement and was only a few years away from her retirement when she taught me in the spring of 2012.

In that class, I acquired a strange range of skills that have since come in handy: I can name every county and county seat in Mississippi and point to it on a map; I can tell you the names of every state and local elected official. In short, my teacher insisted that we do exactly what the title of the course suggested and study our home state.

On the day Mrs. Taylor taught us about Emmett Till, she pulled up the now-famous photo of Mamie Till-Mobley weeping over her son’s casket. The projector flickered a little, distorting the image, but his mother’s grief was plain as day.

“The funeral was in Chicago,” Mrs. Taylor told us. She never raised her voice at us, not even when we deserved it, and that day was no exception. “But Emmett Till died in Mississippi.”

“Where in Mississippi?” one of my classmates asked.

“Money,” she replied, and there were scattered titters at the name of the town, a few mumbles of “I wanna live there.”

“They beat him and tied his body to a fan,” she continued. Then, everyone was silent.

“What made them do that?” another student asked.

“He whistled at a white woman,” Mrs. Taylor said, and she let out a small sigh: a testament and an homage to the blurred lines of teaching history when you’re all too aware of who has written history. “Maybe.”

Her “maybe”—which the white woman herself has confirmed in the years since the murder—echoed in my ears during my mid-September 2021 trip to Washington, D.C. As we held our arms over our heads and passed through the metal detectors in order to enter the Smithsonian Museum of American History, my friend and traveling companion made an interesting observation: The museum is unique in that it sees history as “current.”

The Emmett Till exhibit, which sits in the center of the main hall and is visible immediately upon entering the museum, is no exception to the museum’s belief that history is very, very present. The actual bullet-riddled “River Site” sign largely speaks for itself, as there’s probably less than a thousand words of text on all four of its placards combined.

I’d seen the sign before, in its original location near the Tallahatchie River, where Emmett Till’s killers ultimately dumped his body after eviscerating it. The sign is now more protected in the museum than it had been in its original location, where it was eventually replaced with a 500-pound steel edifice that its manufacturers boast is bulletproof.

A few museum-goers milled around the sign, all of them shocked at the sight of it. One woman wondered aloud what sort of a weapon would leave a metal sign so thoroughly disfigured. (Guns, ma’am, and there’s lots of them down here). A man said, “They’re still doing this,” and I cringed, knowing that as a native-born Mississippian, I was encapsulated in his scornful “they.” I passed around to the back of the sign, and I swallowed at a quote I’d never read before but felt in my bones: “Emmett Till was my George Floyd.”

Not even close to finished, I realized later as I read the replies to my tweet about the Smithsonian’s loan from Glendora, Miss. “Surely Mississippi has more to offer,” one respondent wrote. “Slavery was sad, but let’s move on!”

Emmett Till lived nearly a hundred years after the end of slavery, as several helpful Internet strangers reminded him, though I suppose conflating Emmett Till’s murder with the crushing system that created the dehumanization and racism that led to the sign’s defacement was apt.

Another Twitter user replied, “Mississippi has got to be one of the worst states ever. I wish my remaining relatives would leave this state.”

I didn’t tell him any of those true things, but I think about them as I write this essay. I was 15 years old the first time someone said Emmett Till’s name to me, and I’d hear it countless times over the ensuing years—from my Advanced Placement U.S. History teacher, who shocked and enraged our class full of budding activists by telling us that his murderers still walked free; from my college Mississippi history professor, who showed us images of his disfigured face and told us why it mattered in the telling of our state’s story; from my English professors, who believed deeply that tragedies like the murder of Emmett Till were inescapably enmeshed in the writing of Mississippians.

I say his name now for myself, proving my English professors’ belief that Emmett Till’s blood cries out to us from the pen of Mississippians. I say it even though the governor and half the Legislature might say that it’s proof of the nefarious “critical race theory” infiltrating Mississippi schools.

Mostly, I say it because it’s true, because it’s part of our story, and because, as the Smithsonian reminds us, the past will never really be past if we don’t drag it into the light of day.

This MFP Voices essay does not necessarily represent the views of the Mississippi Free Press, its staff or board members. To submit an essay for the MFP Voices section, send up to 1,200 words and fact check information to [email protected]. We welcome a wide variety of viewpoints.