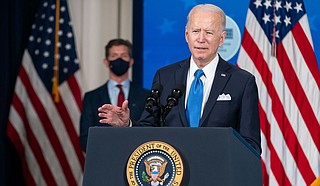 WASHINGTON (AP) — Response to disasters such as Hurricane Ida falls primarily to state and local officials, but the federal government is playing an important support role—making available millions of dollars in aid and coordinating with local officials and private relief groups for everything from meals to generators and search-and-rescue efforts.

“Whatever you need, go to Cedric,'' Biden told Gulf Coast governors and local officials at a virtual meeting Monday. "He’ll get to me, and we’ll get you what you need, if we can.''

The people of Louisiana and Mississippi are resilient, Biden added, "but it’s in moments like these where we can certainly see the power of government to respond to the needs of the people, if the government’s prepared and if they respond.”

More than 3,600 FEMA employees were deployed to Alabama, Florida, Georgia, Louisiana and Mississippi, officials said, along with 5,200 National Guard personnel.

Applying a lesson learned after previous storms, including Hurricane Katrina in 2005 and Superstorm Sandy in 2012, supplies were put in place in the Gulf Coast even before the storm made landfall on Sunday. More than 200 generators, as well 3.5 million meals, 2.5 million liters of water and 139,000 tarps were sent to the Gulf, with millions more meals and water on order.

Hundreds of ambulances and air ambulances and 17 search-and-rescue teams have also been activated, along with a 250-bed federal medical shelter in Alexandria, Louisiana.

The U.S. Coast Guard has 27 rotary or fixed-wing aircraft, and the Department of Defense has 60 high-water vehicles and 14 rotary wing aircraft prepositioned to assist with rescue efforts.

“This is going to be a long haul,” Louisiana Gov. John Bel Edwards told Biden.

Restoring power can be tricky. In 2017, Hurricane Maria devastated Puerto Rico and knocked out the power grid, and the territory has still not fully recovered. Last September, former President Donald Trump released $13 billion to the territory to help rebuild the electrical grid and repair schools after fierce criticism the aid was overdue.

Aware of the widespread criticism of Trump's Maria response — and former President George W. Bush's response to Katrina — the Biden administration has issued regular updates on federal actions, including emergency waivers issued by the Environmental Protection Agency to increase gasoline supplies, and a Transportation Department waiver that makes it easier for truck drivers to move critical freight to areas damaged by Ida.

The waivers will allow truckers to haul in essential items such as food, water, fuel and utility poles, as well as transformers and generators to help support emergency relief efforts.

The Energy Department said it is coordinating with the region's power company, Entergy, and other partners to support efforts to restore electricity.

Offshore oil rigs, under the supervision of the Interior Department, were moved out of the storm’s projected path, and nearly 95% of current oil production in the Gulf of Mexico has been shut in.

FEMA Administrator Deanne Criswell was in Baton Rouge Tuesday, where she surveyed damage by helicopter with Edwards and other officials. FEMA teams equipped with iPads were set to go house-to-house in hard-hit neighborhoods to register people on the spot for individual aid, Criswell said.

"To the people of Louisiana, we are with you and we support you. Help is on the way,'' Criswell tweeted.

Fugate, who led FEMA during the Obama administration, said much of the credit goes to governors, particularly Edwards, whom he described as ”battle-hardened by crisis.″ Louisiana has endured several hurricanes, floods and other disasters in recent years, along with COVID-19, which has ravaged the state.

“Governors are the real leaders in an emergency,″ Fugate said.

The levees, floodwalls and floodgates that protect New Orleans held up against Ida’s fury, their strongest test since the federal government spent $14.5 billion to upgrade a system that catastrophically failed when Katrina struck 16 years ago.

“They passed,'' Fugate said of the levees, "for this storm.''