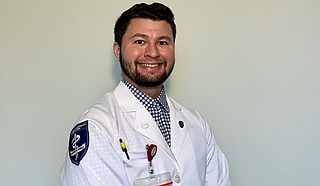 When it came to Stephen Stuart’s dream of medical school, the third time was the charm. “It was always the goal,” Stuart says of his recent acceptance to the University of Mississippi Medical Center. “It just took me a few tries. It’s a very tough, competitive thing to get into.”

Years before Stuart entered the fray of medical-school hopefuls, he began preparing himself for the rigors of the program, majoring in biochemistry at the University of Southern Mississippi in Hattiesburg, which was just a stone’s throw from the rural Oak Grove area he grew up in.

Even though his dreams were briefly deferred, Stuart continued to immerse himself in the health-care profession, working full-time in patient transport at Forrest General Hospital before transferring to the surgery unit as a technician. “I was able to gain a lot of experience,” Stuart says of his time at Forrest Health’s flagship hospital.

Stuart’s stint there, though, was marred by the COVID-19 pandemic, which Stuart says altered his work significantly. “It was a big change,” he notes. “You have to be more aware of your surroundings and be more careful with patient interaction.”

Despite the influx of COVID-positive patients and rapidly shifting safety protocols, Stuart says his enthusiasm for the profession never waned. “I’ve always been super interested in and super dedicated to the field,” he remarks. “So (COVID) hasn’t lowered my interest in continuing my education.”

Medical school, in fact, has helped Stuart focus those interests, as he is currently set on specializing in orthopedics, a field he first became familiar with as a two-sport athlete, playing football and basketball as a teenager. “I was always around that area (of medicine),” Stuart says. “People get hurt playing sports, and they go to an orthopedic surgeon if they break a bone or tear a ligament.”

While countless hours of studying lie ahead as he works toward serving injured athletes, he is enjoying his newfound community in the metro area. “It’s been a bit of an adjustment,” Stuart admits. “But there’s a lot more to do here, and I’ve been able to reunite with some old friends I hadn’t seen in awhile.”

A couple weeks into his first semester, Stuart has been avoiding the potential pitfalls that can come from reentering school after three years by balancing his daily studying regimen with time to decompress and maintain his mental health.

Completing his studies in Jackson also allows Stuart to remain in close proximity to his family, which Stuart says is a priority. He’s happy to be an aspiring doctors at UMMC: “It’s a great school, and I’m glad that I’m able to get a good education from there.”