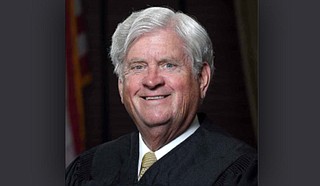 Mississippi Supreme Court Chief Justice Mike Randolph told the Northeast Mississippi Daily Journal that a fully electronic system will be a milestone for open government and will decrease the cost of litigation. Photo courtesy Mike Randolph

JACKSON, Miss. (AP) — All Mississippi counties were supposed to have their circuit, chancery and county court records online by July 1, but only about half met the deadline.

Without an online system, people who want to read court documents must travel to a courthouse, which can be costly and time consuming.

Mississippi Supreme Court Chief Justice Mike Randolph told the Northeast Mississippi Daily Journal that a fully electronic system will be a milestone for open government and will decrease the cost of litigation.

“From a transparency standpoint, it’s magnificent,” Randolph said. “This creates opportunities for people to see what’s going on in the court system that’s never been available before.”

A Daily Journal analysis found that 40 of the the 82 counties have fully integrated their courts into the Mississippi Electronic Courts system. This means the remaining 42 counties either have courts with partial or no electronic access.

“It’s a disservice to the litigants and the public to not have this statewide,” Republican state Rep. Trey Lamar said in 2020 when he sponsored the bill requiring the uniform electronic system.

Randolph said when he was made aware of the July 1 deadline, he asked the electronic courts system director, Nathan Evans, about the timeline.

Evans told Randolph that there was no way the system could meet the deadline with current staffing levels, but employees would continue trying bring courts onto the electronic system “as fast as possible.”

Evans estimated that the electronic courts system staff can integrate, on average, about 1.4 courts into the electronic system each month, with a maximum of two courts per month.

Randolph, who has been chief justice since 2019, said that if the Legislature would appropriate extra money for more system employees, then courts could be added more quickly.

Evans estimated that at the current rate, it will take about three years to integrate the remaining courts into Mississippi Electronic Courts system. If the Legislature appropriates additional money for the system and administrative courts to hire another technician, that could be reduced to about two years, he said.