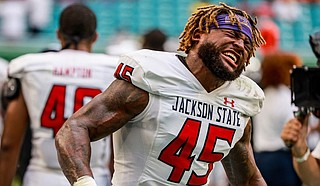 Jackson State University opened the 2021 season against Southwestern Conference newcomer Florida A&M University. The Tigers and the Rattlers faced off in the Denny’s Orange Blossom Classic in Miami Gardens, Fla.

Both offenses struggled to move the ball or score points during the game as the teams combined for just 13 points. The defenses combined to force five fumbles with JSU losing the ball three times and Florida A&M fumbling twice and the Tigers recovering both.

JSU won the game 7-6 as the Tigers scored an early second quarter touchdown in the game's lone touchdown. Florida A&M managed just two field goals both coming in the first half.

One of the Tigers defensive stars was senior linebacker Aubrey Miller. The Memphis, Tenn., native wrecked the Rattlers offense in the form of nine total tackles, seven solo tackles, one tackle for a loss, one sack and one pass break up.

Miller’s efforts earned him SWAC Defensive Player of the Week honors. The win gave JSU a 1-0 start to the season with a conference victory as well.

This is the second season for Miller at Jackson State after transferring from the University of Missouri. He joined the Missouri program in 2018 as he played in 10 games and collected just two tackles.

The 2019 season ended when Miller injured his knee after playing one game and making two tackles. He spent the rest of the season doing rehab on his knee before opting out of the 2020 season.

In November 2020, he entered the transfer portal and decided to join Deion Sanders at Jackson State. Miller played spring ball with the Tigers in 2021 as he finished second in the conference with 51 total tackles, and 30 solo tackles.

Miller and the Tigers will next face Tennessee State University at a neutral site game. The game will be televised on ESPN3 at 6 p.m. in the opening game for former NFL running back Eddie George.

George is best known for his time with the Tennessee Titans in the NFL. One of his teammates on the Titans was former Alcorn State University quarterback Steve McNair.