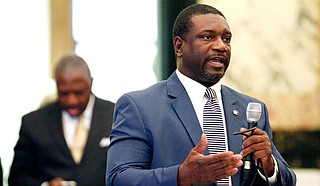 The next Mississippi legislative session is set to begin in early January. Senate Corrections Committee Chairman Juan Barnett said some lawmakers could gather in November or December to discuss whether to file bills that would propose specific types of reentry programs. Photo courtesy Rogelio V. Solis via AP

JACKSON, Miss. (AP) — A Mississippi law that took effect July 1 expands parole eligibility, and lawmakers are looking at programs that could help people make the transition from prison back into the free world.

House and Senate committees met Wednesday at the state Capitol to gather ideas from several people, including prison and parole officials in Alabama, a leader of a nonprofit group that helps former inmates and an executive of a software company that coordinates services for people leaving prison.

One common theme in the presentations was that people who have been incarcerated fare better in the next phase of their lives if they they receive guidance in practical matters such as getting a driver's license, finding a place to live and finding a job.

“We need to make sure that we try to equip individuals with as much as we possibly can when they come back into society so they don't go back into the place they came from,” Senate Corrections Committee Chairman Juan Barnett, a Democrat from Heidelberg, told The Associated Press on Friday. “It's one of those things that we really, really need to tackle.”

Jefferson Dunn, commissioner of the Alabama Department of Corrections, told Mississippi lawmakers that his state develops a “programming plan” for each inmate who enters the prison system, with a goal of preparing them to leave when they are paroled or when they reach the end of their sentences.

“Reentry begins with entry,” Dunn said. “We have reworked our entry process to begin that process of reentry, whether it is three years or 30 years or longer, in the department. ... We want to begin from Day 1 to have inmates look towards reentry and view their time of incarceration as an opportunity and everything that they do to move them closer to reentry.”

Louise Wasilewski is CEO of Acivilate Inc., an Atlanta-based company whose software coordinates communication for what she calls “returning citizens” — people leaving prison. She said the company has contracts in other states, but not in Mississippi.

“We do really simple things like helping people sort out all the activities they have to do and sending them text reminders — just the same way that your dentist sends you a text reminder to make you show up," Wasilewski said. She said such reminders could be used before probation hearings, for example, with the goal of keeping a person from returning to prison.

Mississippi lawmakers also heard from Kerri Pruitt, executive director of the Dannon Project. The nonprofit group was founded in 1999 in Birmingham, Alabama, and it is named for Pruitt's brother-in-law, who was killed by a man who had been released from prison.

“We don’t believe in allowing any of our participants in attending court alone, even when they have a court-appointed attorney," Pruitt said.

Cam Ward, director of the Alabama Bureau of Pardons and Paroles, said state governments need to ensure they use reentry programs that are data-driven with a record of being effective. He said groups outside government can provide valuable help.

“The notion that somehow, some way as a state government you’re going to have enough resources to provide all the proper reentry and diversion programs is just not true," said Ward, a former Alabama state senator. "You’re going to have to have partners.”

The next Mississippi legislative session is set to begin in early January. Barnett said some lawmakers could gather in November or December to discuss whether to file bills that would propose specific types of reentry programs.