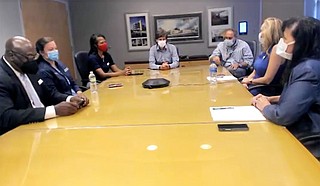 Leadership from the Mississippi State Medical Association reached out in a Sept. 10 press briefing to help provide information about the need for pregnant women to get vaccinated. Photo courtesy MSMA

Mothers-to-be are at an inherently higher risk of complications due to COVID-19 infection, leadership from the Mississippi State Medical Association said at a Sept. 10 press briefing aimed at promoting vaccination in expectant moms.

“Pregnant women are already slightly immunocompromised compared to the general population,” Dr. Michelle Owens, maternal-fetal medicine fellowship director at the University of Mississippi Medical Center. “That perfectly healthy pregnant woman still has a slightly weaker immune system than her exact opposite counterpart who is not pregnant,” Owens added.

“The concept of being vulnerable and the extent that that vulnerability really has an impact, especially in the setting of delta, I think can not be minimized,” Owens said. “That's something that we have taken for granted in the past because we haven't seen very many infectious processes that have been so aggressive in our pregnant population like delta has and like COVID has in general.”

With COVID-19 and specifically the rise of the delta variant, the reality of this immunosuppression has meant hospitalizations and deaths.

“We got busy early on in the pandemic, but it was very manageable,” Dr. Rachel Morris, director of UMMC’s COVID-19 obstetrics and gynecology, said. “Mothers would come in with relatively mild disease, or at first some of them just came in sort of asymptomatic at the time of delivery, and so we started getting familiar with what COVID looked like in a pregnant mother.”

UMMC did see hospitalizations among pregnant women early on in the pandemic and even deaths, but nothing like since the start of this summer.

“Since delta hit us, I would say the number of transfers, the number of intensive-care unit admissions, the number of cases that we have seen at the university is like nothing we saw in the first 15 months of the pandemic,” Morris said.

“We had about 30% of our total ICU volume within the last three and a half weeks. “We've had over four deaths again at the university within the last three weeks from this, but the presentation has been very different, and I think it mimics what the non-pregnant population is looking like,” she said. “Deterioration is much more rapid. Unfortunately, as opposed to it being in the third trimester, we're seeing a predominance of second-trimester infection.”

This means UMMC is admitting women between 23 and 28 weeks pregnant, who are then unable to breathe on their own without the most powerful ventilators the system has to offer. Supplemental oxygen is not enough, nor are other less-invasive procedures.

“We're doing all these measures, turning them, proning them, doing all the regular medications, but they're just deteriorating so rapidly,” Morris said. “These types of things are things you can use in pregnancy, but none of it's working.” Morris explained that proning means placing women safely on their stomachs to facilitate better breathing, in hopes of avoiding intubation. Staff use special pillows that allow for less pressure on the pregnant abdomen.

Owens concurred, sharing her own disconcerting experience with delivering babies that are just able to survive on their own, sometimes with no mother to care for them.

“These are babies that end up in our newborn ICU,” Owens said. “Unfortunately, there are babies that are surviving in the NICU and will not know their mothers because we are losing these moms because of the aggressive nature of this disease.”

“We have never, ever in all of the 13 years that I've been at the university had anything like this,” Morris said. “The mothers are requiring such levels of oxygen that the ventilators in the ICU are the only ones strong enough.

Morris and others at UMMC have been forced to do seven bedside Cesarean deliveries in the last three weeks, which means the operation to save the life of the infant has been so urgent that there was no time to move patients to the operating room.

“We've had mothers arrest at the bedside,” Morris said. “We've had to run, myself included, from one hospital to the other. When a mother gets so sick, you have minutes to deliver the baby or there is no baby.”

“We have gotten so good at a bedside Cesarean section it’s out of this world,” she said. “It's so devastating.”

“You can’t really put it into words,” Owens concurred.

‘There’s No Reason To Wait’

The team stressed that the majority of these cases are unvaccinated women.

“We have not seen one mother in our hospital who has been vaccinated, who has been ill,” Morris said starkly. “Not critically ill, not ill, like not in the hospital, not one vaccinated pregnant mother,” she emphasized.

Owens expressed concern over a lack of correct information for Mississippi’s expectant mothers, where only one in four pregnant women are vaccinated.

“One of the difficult things that we've encountered as we're watching this increasing number of cases is that we're also seeing people who are very reluctant or who have been given either inadequate information, misinformation, or who have been conflicted about the safety and efficacy of the vaccine,” Owens said.

“Vaccination is safe and effective, and it is recommended, and the vaccine is approved,” she said. “We're really trying to get that message out to everyone.”