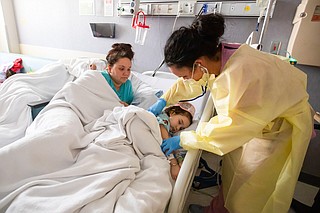 Pediatric endocrinologists in Mississippi and across the nation are sounding the alarm that diabetes diagnoses in children are rising at staggeringly high rates during the pandemic. Dr. Jessica Lilley and Irena McClain fear that the virus behind COVID-19 is squarely to blame. Photo courtesy Children's Hospital of Mississippi/UMMC

Dr. Jessica Lilley is a pediatric endocrinologist at the Mississippi Center for Advanced Medicine. For eight years she has seen children from across the state for pediatric diabetes and other hormonal issues. With each passing month of the pandemic, Lilley has grown increasingly concerned that COVID-19 is linked to a massive increase in new diagnoses of pediatric diabetes throughout Mississippi.

Lilley is not alone in her observation. In conferring with other pediatric endocrinologists across the state and nation, Lilley says the spike in new cases is widespread. “We are all seeing an increase in type 1 diabetes diagnoses as well as type 2 diabetes diagnoses. Those of us who tracked it have noticed anywhere from a 30% to 40% increase compared to (2019),” she told the Mississippi Free Press in a series of interviews in August and September.

The full measure of childhood diabetes emerging during the COVID-19 pandemic is still unknown. But experts are deeply concerned across the nation. In late June 2021, at the 81st Scientific Sessions of the American Diabetes Association, pediatric endocrinologist Dr. Brynn E. Marks of Children’s National Hospital warned of a “staggering increase in cases of type 2 diabetes,” as well as an “increase in the severity of (the disease’s) presentation.”

Researchers presenting at the conference reported a doubling of youth hospitalization rates for type 2 diabetes, compared with the pre-pandemic period. Researchers in that study hypothesized that the indirect effects of quarantines, closures, and unemployment may have exacerbated the incidence and severity of the disease.

Diabetes Foundation of Mississippi Associate Director Irena McClain says the social conditions that the pandemic has caused are fertile ground for the growth of diabetes, in adults as well as children. “Severe emotional stress (may trigger diabetes), especially for some kids who might be genetically predisposed,” she said in an interview. “Say the family breadwinner loses their job and they don’t have insurance and, say the family loses their home. Does that trigger the emotional distress that could (lead to) diabetes? That’s what we’re trying to figure out.”

Diabetes affects and kills more Black Mississippians than white, a trend that researchers have stressed that the COVID-19 pandemic has expanded. “Looking at both datasets, there appears to be a racial disparity in type 2 diabetes diagnoses that has only been exacerbated by the COVID-19 pandemic,” Dr. Daniel S. Hsia of the Pennington Biomedical Research Center wrote.

But evidence exists for more than environmental triggers for diabetes during the pandemic. COVID-19 is a systemic disease, which extensive research and clinical experience have revealed can target all of the body’s most critical organs. The National Institutes of Health reported this summer that the virus “can target and impair the body’s insulin-producing cells,” directly disrupting the process the body uses to regulate its blood sugar.

“Studies confirmed (the) infection of pancreatic beta cells in autopsy samples from people who died of COVID-19. Additional studies by the Jackson team suggest that the coronavirus may preferentially infect the insulin-producing beta cells,” Dr. Francis Collins, director of the NIH, wrote.

Lilley’s fears extend beyond the sharp uptick of pediatric diabetes seen in 2020. No period of infection has spread more among Mississippi young people than the delta variant of coronavirus. By late August, schools across Mississippi had already identified thousands more cases of infected children than during the entire fall semester of 2020.

As more children have fallen ill with COVID-19, Lilley has seen the greatest spike of new diabetes in the entire pandemic. “I’ve noticed since delta has landed in Mississippi that I have had a pretty abrupt increase in diagnoses,” Lilley said in late August. “Typically I will diagnose a child with type 1 diabetes every other week. That’s been pretty standard for the eight years I’ve been in Mississippi. But over the last two weeks, I’ve diagnosed six new children.”

The Diabetes Foundation of Mississippi helps families with newly diabetic children prepare for the material challenges of navigating life with diabetes. The foundation puts together diabetic backpacks containing information and tools for understanding diabetes and treating blood-sugar deficiencies, and sends them to children after endocrinologists like Dr. Lilley diagnose them.

“Last year, around May and June, we realized the sheer number of requests for backpacks that we were getting,” McClain told the Mississippi Free Press. “We started counting up how many we’d gotten so far that year, and that’s when we reached out to Dr. Stephen Ponder, another endocrinologist in Texas. I asked him, ‘Do you realize how many kids we’ve had diagnosed so far this year?’ And of course they’d noticed.”

McClain says the new diagnoses her organization has witnessed over the pandemic outstrips any year that they examined. ”We went back through 10 years worth of data and sent it over to UMMC,” McClain said. “We normally see between, say, 80 and 100 children diagnosed, mostly coming through (Blair E. Batson Children’s Hospital). Last year we had 184 kids diagnosed.”

She added that this was only part of the new diagnoses in the state. “This could be just a sliver. I don’t know how many more kids are out there that we don’t know about,” McClain said.

This year, McClain personally witnessed more than 100 new diagnoses of pediatric diabetes by the end of summer. But, notably, much of 2021 has seen limited transmission of the virus since the introduction of the vaccines. It is now, during the monstrous delta surge, that McClain worries new diagnoses will skyrocket, alongside other serious pediatric complications like multisystem inflammatory syndrome.

Lilley and McClain cannot say for certain that SARS-CoV-2, the particularly virulent coronavirus behind the pandemic, is exclusively to blame for the staggering uptick in new cases of pediatric diabetes. Diabetes, both type 1 and type 2, are complicated diseases, with genetic and environmental components.

In-depth studies of COVID-19’s effects on the human body reveal bizarre symptoms and reactions, some of which are in line with viral reactions that trigger the onset of diabetes.

“(Studies of) changes in gene activity within pancreatic cells following SARS-CoV-2 infection … showed that beta cells go through a process of transdifferentiation, in which they appeared to get reprogrammed. In this process, the cells begin producing less insulin and more glucagon, a hormone that encourages glycogen in the liver to be broken down into glucose,” Dr. Collins wrote.

In the simplest possible terms, as Dr. Lilley confirmed, this means that researchers have reported evidence of pancreatic cells that should be assisting in the storage of sugar in the body being transformed after COVID-19 infection to instead release stored sugar, a process Collins predicts would “worsen insulin deficiency and raise blood glucose levels.”

It will take years of research to fully parse the many intersecting elements of COVID-19 and its relationship with diabetes. “Any viral trigger can cause auto-immunity,” Lilley said. “Are we seeing more auto-immunity because of COVID? Are we seeing (viral) toxicity to the pancreas, where insulin is made? Are these cases that would have been diagnosed over the next five years, all being diagnosed now, through some kind of compression effect? That’s all subject to intense research.”

Lilley explained how both the virus itself and the social conditions it causes are a perfect storm for possibly generating both forms of diabetes. “First, we are seeing decreased activity, changes in eating patterns, changes in access to well-child care, rapid weight gain associated with stress—we obviously increase our risk for type two diabetes,” she said. “And with any wave of viral illness, we expect a resultant wave of autoimmunity (like type one diabetes) to follow.”

A full understanding of the swell of pediatric diabetes may be some time away, but Lilley, McClain and the other endocrinologists and experts agree that the surge is real, whatever its causes may be.

The growing evidence of links between COVID-19 and diabetes is a direct challenge to the notion that children have nothing to fear from the virus. The medical experts interviewed for this story stressed that the virus and the complex disease that it causes are still poorly understood, and have the potential for immense long-term harm, even to those who seem resistant to its most visible symptoms.

Doctors say the solution to the troubling evidence is simple—prevention and monitoring. Lilley is deeply enthusiastic about childhood vaccinations for COVID-19 to protect the state’s young population from the still-unknown consequences of the virus.

“Vaccinating eligible children is very important. And until that time doing everything we can to protect children from COVID infection, from masking to distancing and making smart choices about ventilation and gathering in groups is going to help us,” Lilley said, adding that parents should stay informed and alert for the early warning signs of diabetes in their children.

“If any child has symptoms of diabetes—being thirsty, urinating a lot, losing weight, being fatigued—it’s worth a visit to your doctor to screen for diabetes,” Lilley said. “Early diagnosis is key and prevents a lot of badness.”

McClain sees experimental treatments for certain forms of diabetes on the horizon. “I know there’s a lot of researchers working on trying to prevent type 1 diabetes or trying to come up with better technology, like the bionic pancreas,” she said. But those are mostly hypotheticals, McClain stressed. What is real today is the vaccine. “If you have a family history of type 1 or type 2 diabetes especially, it would really behoove everybody in the family who’s eligible to get the vaccine.”

Even as the delta wave recedes, Lilley knows her work is only just beginning. “I think Mississippi children and the myriad ways that the pandemic has affected them—directly infected them or affected them just by the changes in their daily lives—makes this a story that will continue to unravel for years to come,” she said.